Arriving in a small meteor storm was the caterpillar-like monster Goglan as a baby, crashing into the space station EGG 3. Before Goglan could go far, Choici used a piece of a girder to smack it unconscious and it would be sent to a greenhouse for safe keeping. Some time later, after Choichi gained the power of Ultraman Joneus, Goglan managed to grow to the size of a rhino before killing the greenhouse guard my melting him with its acid. Goglan proceeded to devour the city upon escaping with the military and Scientific Defense Guard unable to even slow it down. Shortly after consuming part of a bridge, the colossal caterpillar attacked an oil refinery and was swallowed up by a gigantic fire. The body was covered in ash and as investigators were studying it, Goglan emerged in its adult form as a giant butterfly. Goglan blew away the investigators and buildings alike as it consumed a large tower before being attacked by the Scientific Defense Guard. After Choichi's fighter was struck down by Goglan, he transformed into Ultraman Joneus. Goglan attacked him, but Joneus proved too much for it and before it could fly far the hero used Planium Ray to destroy the rampaging insect for good.

Ash Cocoon
Add a photo to this gallery
Goglan (Imago) 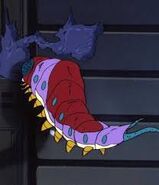 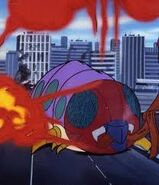 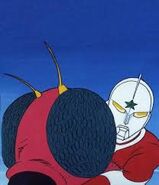 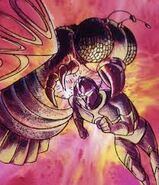 Add a photo to this gallery
Retrieved from "https://ultra.fandom.com/wiki/Goglan?oldid=459892"
Community content is available under CC-BY-SA unless otherwise noted.