Shin Ultraman
Goga (ゴーガ Gōga) is a Kaiju that appeared in episode 24 of Ultra Q.

After destroying the ancient civilization of Aranka, Goga was somehow trapped inside a small statue. Centuries passed and the creature became nothing but a legend, but when the statue was stolen, a six-thousand year old curse came to life. Beams of light fired from the statue’s eyes, engulfing one of the burglars in flame. The statue then fell apart, revealing the snail-like creature. The beast quickly began to grow, becoming larger and larger.

Soon it emerged from the building, tearing its way through the streets around it. Jets swooped in to attack, but their rockets did nothing to its mighty shell. In response, Goga fired back, quickly destroying the jet fighters. The monster’s wrath continued unopposed to another attack was launched, this time targeting its head. A powerful explosion engulfed the ancient monster, forcing it deep into the ground.

It didn’t take long for it to resurface, but when it did, the self-defense forces were ready. Firebombs detonated all around it, trapping it within a sea of fire. Not even its shell could save it as the temperature charbroiled the snail within. Unable to escape fast enough, Goga the destroyer was finally put to rest, never to plague the world again.

Kaigel is one of the many S-Class Species that appeared in a mass outbreak across Japan. Kaigel was the first monster to be faced by the SSSP following its formation as a special division of the JSDF.Shin Ultraman 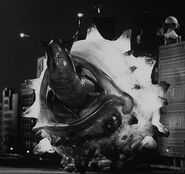