What the Gobnu (Vaha) were or where they came from before their invasion of Tokyo was unknown, but they were created to keep humans away from finding out the immeasurable power of the Maxima Overdrive technology, a matter-antimatter powered device which gave off pure light as a waste product. After the technology was developed, the Gobnu (Vaha) were dispatched to Earth, where they stalked the streets of Tokyo at night. After countless reports of the "Iron Masks", GUTS was sent to investigate and soon found a single Gobnu (Vaha) walking across the street. After Shinjo shot the robot with the Hyper Gun, it was discovered to be hollow inside. Soon, TPC began to collect the remains of the others and keep them in the GUTS base. Once they detected the Maxima Overdrive's power when the new super-ship, Artdessei, was activated, they soon revived and attacked the base. The GUTS members were ordered to board the Artdessei while Daigo fended off the Gobnu, keeping them at bay until the Artdessei lifted off. In order to pursue it the Gobnu combined themselves into the powerful Gobnu (Giga). Later, when Gobnu (Ogma) was destroyed, the Gobnu (Vaha) and the Mechanical Island was destroyed along with it.

Shortly after the Artdessei lifted off, the Gobnu (Vaha) began to pursue it by first smashing a hole in the float tank of the GUTS Base, then combining into Gobnu (Giga) after landing in the ocean. As the basement began to flood, Daigo transformed into Ultraman Tiga to prevent Gobnu (Giga) from chasing after it. However, even in Power Type, Gobnu (Giga)'s strength still proved superior to Tiga's. The battle turned to worse as the water heavily slowed down Tiga, who was already slowed by being in Power Type, while Gobnu (Giga) still maintained a constant speed. Soon, Gobnu (Giga) knocked Tiga over and held him to his chest. Suddenly, the lights on his head began to blink and go off, signaling his time bomb. Tiga, helpless with his Color Timer already red, struggled with the last of his strength kicked off Gobnu (Giga)'s right leg. He then lifted Gobnu (Giga) into the air and threw him well out of Earth's atmosphere, allowing Gobnu (Giga) to explode safely away. However, this battle would cost Tiga, as he then disappeared. Later, the robot's component was brought to Dive Hangar for research.

After the Artdessei landed on the Mechanical Island, a hole appeared and trapped them inside. Meanwhile, Daigo landed as well using the Snow White and tried to contact them, but the usage of the Maxima Overdrive on his trip aroused Gobnu (Ogma). Daigo quickly transformed, but even then, Gobnu (Ogma) outclassed Tiga using electro blasts and began to torture him. The GUTS crew then unleashed their Maxima Overdrive in reverse to escape the island and unleashed their Deluc Cannon on the robot while Tiga used his Zeperion Beam on the island, destroying both threats. 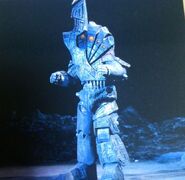 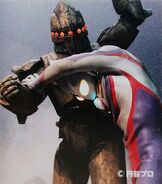