Goadarion was one of many monsters placed in the monster asylum by the U40 warriors. Once the Imedo Beings hijacked the asylum, they set it toward Earth and released the monsters from their imprisonment. Shortly after this, the Scientific Defense Guard landed on the planet surface they were assaulted by monsters with Goadarion being sent to Earth to distract them. With little effort the giant alien bat slayed the global defense force's space fighters and used his super sonic flight to wreak havoc around Tokyo. Once Goadarion proved to much for the Scientific Defense Guard to handle, Choichi turned into Ultraman Joneus. The two giants clashed with both of them barely able to gain a real upper hand on the other, but Joneus persisted against Goadarion's onslaught of attacks before finishing him with the Planium Ray. 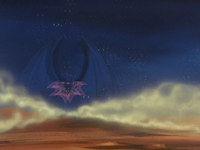 Wing Cyclones
Add a photo to this gallery 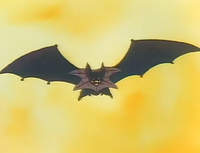 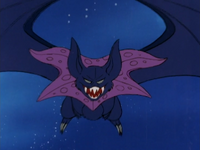 Add a photo to this gallery
Retrieved from "https://ultra.fandom.com/wiki/Goadarion?oldid=510915"
Community content is available under CC-BY-SA unless otherwise noted.