"To think to overwhelm him with sheer mass, I'm impressed!"
"I know it's cheap to scale up, but our guest is being cheap too. You're up, Gridman. How will you fight a Kaiju of this size?"

SSSS.GRIDMAN episode 11 "Decisive Battle"
Go'yavec (ゴーヤベック Gōyabekku)[1] is a Kaiju that debuted in SSSS.GRIDMAN. It was made to overwhelm Gridman with its massive size.

Akane was getting fed up of Gridman defeating all her kaiju, so she decided to try creating one that would dominate him using great size. Go'yavec was brought into action by Alexis when Akane called him during her rafting trip, having confirmed her suspicions of Yuta Hibiki transforming into Gridman. Go'yavec then caused aimless destruction and started a forest fire, endangering the Tsutsujidai students and staff. This went on for a while, disappointing Akane who expected Gridman to show up sooner. After Rikka Takarada called her mother's shop, the Neon Genesis Junior High Students bought Junk using whatever money they could fork up and brought it all the way to near the forest area, allowing Yuta to Access Flash and fight Go'yavec. Buster Borr joined the battle was well, providing support to Gridman against Go'yavec and Anti, who had joined the battle. Combining into Buster Gridman, the Twin Buster Grid Beam was used to destroy Go'yavec, whose remains crumbled over Anti. Provocation

Go'yavec was the last of the Kaiju army summoned by Alexis, and it almost defeated Gridknight. Luckily, Full Powered Gridman arrived in the nick of time to protect Gridknight and the gigiantic monster was finished off the same was as before - with the Twin Buster Grid Beam. Decisive Battle 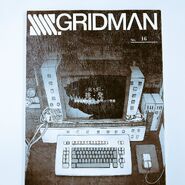