Ultraman 80 episode 47 "The Evil Glove is Laughing at You"
Glovusk (グロブスク Gurobusuku), also known as Grobsku[1] is a Minus Energy Kaiju that appeared in Ultraman 80, he appeared in episode 47.

Glovusk was one of the many Minus Energy monsters to plague the world in Ultraman 80’s era, birthed as just ultraviolet rays was then absorbed into a glove from the sadness and anger of a young man who was frustrated playing baseball. The ultraviolet rays converted into minus energy that would become him made its presence known with an aurora that disrupted electronics throughout the area. However, the aura soon vanished as mysteriously as it’d appeared. The boy had a major failure at baseball and yelled at his glove to vent his frustrations. Sensing his anger and frustration, the negative energy descended from the sky and merged with the glove, forming the bizarre monster Glovusk that approached him with evil laughter. The demonic glove chased him around, laughing at him. It stopped to let him touch it, then shocked him. The boy tried to attack it with a stick, only for that to be destroyed by its shock. Thankfully, Yamato and one of his allies arrived on the scene and scanned the creature, discovering it was full of minus energy. The creature watched them before fleeing, landing on a tree limb to mock them. Yamato tried shooting it, but it had no effect. The bizarre creature flew off and vanished into thin air, through fooling with them. UGM quickly took action in order to prevent the tiny monster from causing more trouble. Glovusk reverted back to his glove form to hide, being found by the boy’s father, but wafter being put on by him, the demonic glove transformed, attacking him while still attached to his hand, pulling him around until Yamato and Ryoko arrived, Ryoko firing a beam from her hand to force the creature off. The monster ran from the two Ultras in human form, finally turning to confront them. Ryoko tried her beam again, but instead of being effected, Ryoko absorbed it and grew to giant size.

After a second hit from Ryoko’s finger ray, Glovusk grew into a towering Kaiju and began destroying the city. The military tried to stop his attack on the city, but the strange monster merely blew them away with his energy beams. After sun set, the negative monster vanished once again. The UGM quickly resumed their search for Glovusk, Yamato managing to find his location, he hadn’t vanished, he was invisible. Yamato soon transformed into Ultraman 80 and made the creature visible, attacking it with a flurry of attacks, but nothing so much as fazed the creature. Glovusk flipped over and used his five limbs to fight, then crawled across the ground, fooling with the hero. 80 had enough and used his Ultra Soccer Ball to knock him down, only for him to keep up his attack until Ryoko distracted him with her energy ray. 80 chased Glovusk through the air, finally forcing him down and pick him up. 80 then spun Glovusk around and hurled him, as the strange monster rose again, 80 grabbed one of his arms and throw him overhead to the ground. Ultraman 80 then used a variant of the Succium Beam to destroy the negative energy within the beast, reverting him back into a harmless glove once again, which was returned to the boy. 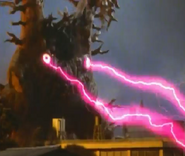 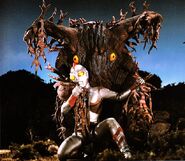 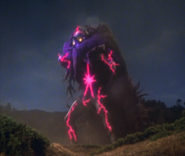