None
The Gloker (グローカー Gurōkā) are an army of robots that appear in Ultraman Cosmos vs. Ultraman Justice: The Final Battle. A whole army of robots that serve as the agents of Universal Judge Delacion, the Glokers were deployed to Earth after she deduced that humans would be the next threat to the universe's peace.

When the Universal Justice, a peacekeeping organization predicts that humanity will be a threat, they sent Gloker armies and Ultraman Justice to make sure not every single human leave the Earth in order to eliminate all of them via Giga Endra. Two of the Gloker Pawns arrived at the rockets and began attacking until Cosmos, in his Space Corona mode, arrived. The hero managed to defeat the two robots, but Ultraman Justice arrived.

Instead of aiding his old friend, Justice revived the machines. They then attacked and blew the hero back and vanquished him. The battle ended, the Gloker Pawn army moved across the globe, attacking city after city until reaching Japan again. This time, however, many of Earth’s monsters attacked. Donlon, Bolgils, Lidorias, and Golmede fought against the machines alongside EYES. All but two were destroyed, and the last two would combine to form the Gloker Rook.

Stronger and more powerful than the pawns, the Gloker Rook waged all out war on the Earth monsters. Blasting them and slashing them, the machine plowed through them with relative ease. However, watching the carnage unfold, Ultraman Justice could stand no more of this reckless violence. He transformed and took on the robot, but the machine was a force to be reckoned with. It was a powerhouse, blasting Justice repeatedly, but the giant managed to fight through its arsenal with the help of EYES and fired his Dagrium Beam, obliterating the machine.

The strongest of the three robot types, the Gloker Bishop was unleashed with Gloker Mother detaching it's parts to donate for the new Glocker after Rook was destroyed. This was a powerful opponent that not even Justice could take on alone. It fired away, blowing the giant back as his energy ran low. Ultraman Cosmos, however, was resurrected and grown in power. The giant arrived to battle Justice, but found his opponent in battle. Seeing that Justice had returned to his old, better ways, Cosmos and Justice joined forces. Slowly breaking the robot down, the two fought hard. As the machine repeated its words over and over, the two super beings fired their weapons at once. They combined mid-way into a single beam and smashed into its body. When the robot fell back, it exploded, sending a massive ball of fire rocketing upward.

Gloker Mother (グローカーマザー Gurōkā Mazā) is a class of spaceship in the Gloker Army. In addition to deploying Gloker Pawns, it serves as a carrier for the Gloker Bishops. Though only a single unit appeared on Earth, additional Gloker Mothers were seen as part of Delacion's fleet in space.

When Earth monsters and Earth defense forces gained the upper hand of these eliminators, two remaining Glokers combined themselves to form Gloker Rook (グローカールーク Gurōkā Rūku) (or addressed by Julie Gloker Type 2). In addition, they also repeat the following quotes: 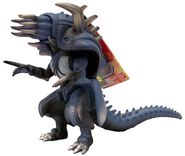 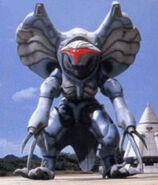 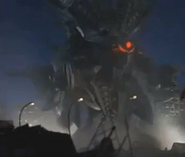