TBA
The Another Genesis version of Glenfire.

Back when the Kingdom of Light fell, Glenfire encountered Taro who had survived the death of his mother and supposed death of his father. Glenfire laid low for many centuries afterwards until destiny called on him again.

Many centuries later Glen would save Blast from Burai, who sought to take the young giant's shard, which was keeping him alive. He fended him by using the Ultra Dynamite. Burai, who recognized him was ready to attack but stopped when Glen told him that his son was still alive. Burai let them past and Glenfire escorted Blast to Planet King. 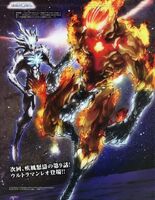 Retrieved from "https://ultra.fandom.com/wiki/Glenfire_(Another_Genesis)?oldid=510908"
Community content is available under CC-BY-SA unless otherwise noted.