Jumborg Ace episode 8 "The Trumpeter Plays for the setting Sun"

Glass King was made by Anti Go-Ne in the middle of a forest one day to attack a power plants to absorb its electrical energy. PAT was quickly informed of the attack, arriving too late as the monstrous bird left only flaming wreckage. While Glass King hid in a small canyon to avoid PAT, a blind psychic woman named Mitsuko kept having visions of the beast throughout the day. Glass King attacked another power plant the following day, PAT and Jumborg Ace quickly intercepted it. PAT was kept at bay while the monstrous bird and hero collided with one another midair. Jumborg Ace easily overpowered Glass King which forced it to fly around it until it was shot down. The hero used punches and kicks to knock the monstrous bird down only for Glass King to fly off once more. In the air both giants exchanged beam attacks onto the other, Jumborg Ace eventually resorting to decapitating and destroying Glass King with the Heading Killer. 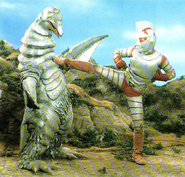 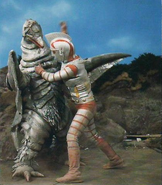