Because Undergroundmon intended to destroy factories for conquest, the underground creature used Gitagitanga to destroy as many industrial areas as possible. TAC was quick to respond and Undergroundmon said he was going to attack if humanity does not stop extracting water in the next 10 hours. Gitagitanga was summoned away until he was summoned the next day. It was also revealed to Hokuto that Gitagitanga was responsible for murdering a young boy's dad by using its gases to make him intoxicated. After destroying some buildings, Undergroundmon decided to join the rampage and both monster and master proceeded to destroy a majority of the area. Ultraman Ace was summoned to battle the duo. The destructive duo seemed invincible until the encouraging words from the boy assisted Ace and Gitagitanga was destroyed by Ace's Ace Lifter. 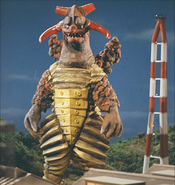 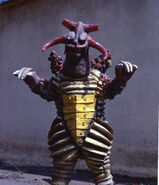 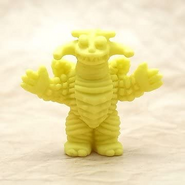 A Gitagitanga eraser
Community content is available under CC-BY-SA unless otherwise noted.
Advertisement