None
Giron Man (ギロン人 Gironjin) was a Seijin that appeared in episode 5 of Ultraman Ace.

Giron Man was an underground humanoid agent of Yapool's set on building an Underground Fortress beneath Tokyo. To assist the subterranean menace, Giron Man brought with him a monster, Aribunta to serve him. After the first Aribunta was destroyed by Ultraman Ace, Giron Man revealed himself to the ultra as the one who was controlling Aribunta. Shortly after, Giron Man imprisons Ace inside of a circle of stalactites and leaves him to die underground as he joins Aribunta on the surface world in destroying a city.

Some members of TAC tried to face off against the two, but none of their weapons did much to Aribunta's strength and Giron Man's teleportation. Eventually, Ace calls out to Zoffy for help and soon enough, Ace frees himself from the underground and faces off against both Aribunta and Giron Man. Due to the match being two against one, Ace was easily outmatched. However after Zoffy rescued the remaining members of TAC, the Ultra assisted Ace in the final battle against the two monsters. After a lengthy fight, Zoffy grabbed Aribunta around the neck and ran towards Ace whom had Giron Man around the neck as well and the two Ultras rammed the monsters' heads together breaking their necks, killing both Terrible-Monster and master. 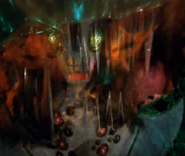 The Giron Man in a stage show. 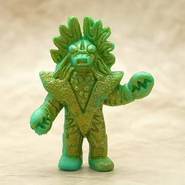