The evil alien first appeared when he attacked a city. Ultraman Cosmos showed up and fought him only to realise that its wings can seaerate. The alien retreated for a while. At EYES Treasure Base, Doigaki reveals that the alien is actually two living things, naming them as GiriBanes (ギリバネス Giribanesu). He named the humanoid alien Giri (ギリ Giri) and the wing-like alien Banes (バネス Banesu) as both of them are also bloodsucking organisms. Banes disguise herself as Ai Misaki (ミサキ・アイ Misaki Ai), Fubuki's girlfriend whom died in an aviation accident to hypnotize him into give her the EYES Data. But her plans failed after Fubuki finally snapped out from her spell. Giri appeared where he summons a fleet of battleships and fights Cosmos. Banes combines with him again as they overpowered Cosmos. Trying to flee from Earth, Fubuki pilots the TECCH Spinnar and destroys Banes. Giri fall into the Earth and self destructs after knowing that his invasion plan will be failed by Cosmos, at the same time his own armada retreated when human forces as well as Cosmos proven their strength.

One day, during a flight, Giragas appeared and attack Team EYES’ due to jet mistaken them for hostiles. They landed and assume their human disguises. Giragas F orders Giragas M to hide as she tries to talk with EYES. F later placed at the SRC hospital and lied that their arrival was to avenge Giri despite him died of suicide rather than destroyed by EYES and Cosmos. That night, M release her from the hospital as Musashi and Shinobu chase them. Shinobu later captured as she secretly leaked their information via her watch. She escaped as Musashi discuss with the duo Giragas, revealing they were actually fugitives from GiriBanes’ species. The soldier later surround the Giragas and tried to arrest them. Giragas M transforms and attacked by the tank soldiers. Cosmos appears and stops the soldiers from hurting Giragas M despite him also attacked Cosmos. Upon finally being released by the JADF, Giragas F transforms and stops Giragas M as she combined back with him and fly away back to their planet, reuniting with their comrades. 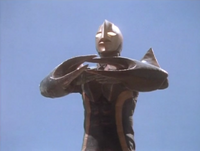 Cut Hooks
Add a photo to this gallery
Banes 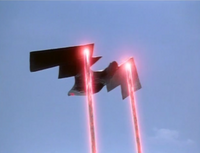 Human Disguise
Add a photo to this gallery
GiriBanes 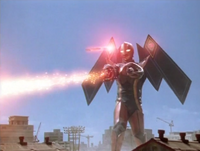 Flight
Add a photo to this gallery
Giragas M

Transformation
Add a photo to this gallery
Giragas F

Transformation
Add a photo to this gallery
Giragas 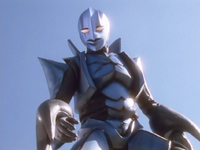 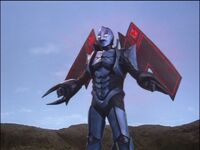 Add a photo to this gallery
Retrieved from "https://ultra.fandom.com/wiki/Giragas?oldid=510898"
Community content is available under CC-BY-SA unless otherwise noted.