None
Gillar (ギラー Girā) is a cybernetic ceratosaurus created by Gottes to fight the Izenborg team in Dinosaur Great War Izenborg.

When Gottes got fed up with the constant failure of Ururu, he sent the tyrant king to fight. When that failed, Gottes fought Izenman and warned him the war was just begining! Looking over the past failures, Gottes sent Gira, a cyberneticly enhanced cyborg, to attack Tokyo. But his time was cut short when Izenman combined with the Izen I and became Izenbo. 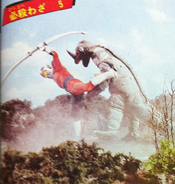 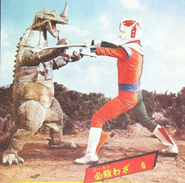 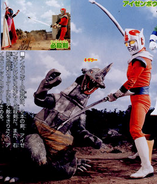