It is a legendary item in the Land of Light, said to be only be accessible to a chosen savior bearing the Mark of Courage and the only thing able to break the curse of the Dark Spark.

The origins of the Ginga Spark are unknown. It was once used by Ultraman Ginga to battle the owner of the Dark Spark. However, Ginga clearly lost and was transformed into a Spark Doll, and the Spark fell to Earth where for centuries it was protected and worshipped at Hikaru Raido's family shrine. One day, when he returned, he found the shrine had been burned down and the Ginga Spark, which was being protected by Hikaru's grandfather. The presence of the Ginga Spark was causing the Spark Dolls hidden all over the village to begin activating.

After Ginga defeated Dark Lugiel and all of the Spark Dolls were freed from the curse of the Dark Spark, Ginga departed back home with the other Spark Dolls. Although Ginga was supposed to return back to his future universe, his transformation item, the Ginga Spark was still in Hikaru's possession, meaning that his bond with Hikaru didn't lose even when he is faraway in the universe, returning if Earth is in danger again.

In Ultraman Ginga S, Hikaru is shown using the Ginga Spark again after Ginga reunites with him to fight against Alien Chibull Exceller and his army. He is shown having it on his person despite it not being of any use.

Hikaru selects a doll, scans the mark on its left foot (or the equivalent) with the device and raises it into the air. It is known that when he uses it on another Spark Doll, the device shouts out "Ultlive" and then the name of the Spark Doll he uses (Does not work on Ultraman Taro). However, when he uses the Ginga Doll, Ultraman Ginga's face will appear on the Ginga Spark before transforming. This might be due to the fact that the Ginga Spark is connected to Ultraman Ginga.

The Ginga Spark is an object of Legend in the Land of Light, presumably it possesses great power. It is known that it is the light counterpart to the Dark Spark. Only the 'chosen one' signified by the Mark of Courage, can wield it, in anyone else's hands it is useless. The mark appears on this person's hand and is similar to the Live Sign seen on the Spark Dolls. 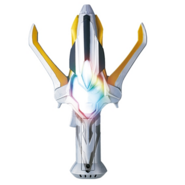 Hikaru using the Ginga Spark to Ultralive into Ultraman Tiga. 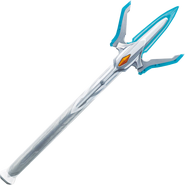