Gina, along with her two siblings, served as main antagonists of the Andro Melos series. As with the other Gua siblings, she has a rival in the form of Andro Flor and in the end, Gina was killed by her.

Gina appeared in Ultraman X as Gina Spectre (ギナ・スペクター Gina Supekutā). Here, she was revived alongside Mold during the events of Ultra Fight Victory by Yapool but the two weren't able to do anything to help Juda Spectre and due to his death, they decided to reform the Gua Army in hopes of conquering the galaxy.

Gina first appeared awakening a slumbered Demaaga and used it as a test subject by being struck by a Dark Thunder Energy into Tsurugi Demaaga. Seeing how it as successful, she fought Asuna when she was studying Demaaga's awakening room alongside the Lab Team. Soon, she summons Zaragas from a Spark Doll to replace her while she checked on Tsurugi Demaaga. Soon she hired Alien Magma and Alien Shaplay as new members of Gua Army. End of the Rainbow

Communicating Mold and inform him of Ultraman X, she was informed that he would gather the Gua Army to be bathed with the Dark Thunder Energy and brings Sho/Ultraman Victory as their hostage until he escaped, followed by UPG and Xio's interference. She was soon bathed with the Dark Thunder Energy alongside Mold to strengthen their energies. Eventually, she and Alien Shaplay battled the attack teams while Ultramen X and Victory fought Mold and Alien Magma. Sword of Victory

After purchasing from Alien Markind, Gina used Mecha Gomora as a diversion to Xio and UPG while Mold attacked their base. Gina duel against the UPG members and almost get herself killed until Alien Shaplay took the bullet for her. She later combines with Mold and Juda to become Gua Spectre. The Shining Sky, and the Land Beneath It

Gina was revived in her Spectre form by Reibatos under the command of Absolute Tartarus. She demanded to see her brothers again but Tartarus restrained her, saying that if she wanted to see Mold and Juda again, she would have to gather the Devil Splinters for him. With no other choice than to comply, Gina went to Planet Liquitor and attacked Ultraman Fuma after he had just recovered a Devil Splinter from a Pestar. Ultraman Orb, Ultraman Rosso and Ultraman Blu arrive in time to help Fuma, but Gina managed to escape with the Devil Splinter.

Gina later arrived at the Monster Graveyard, taking a Devil Splinter from Ultrawoman Grigio, Ultraman Zearth, Ultraman Nice and Ultraman Boy. Grigio attempted to sympathize with Gina, only to be denied. The New Generation Heroes then came and challenged Tartarus and his group, with Geed and Z facing off against Gina Spectre. However, during the battle, Reibatos was infused with the power of the gathered Devil Splinters, enhancing his Reionics powers enough to recreate the Giga Battlenizer, which he used to summon the souls of Mold and Juda to fuse with Gina, creating Gua Spectre. Gua was too powerful in his new perfect form, forcing the New Generation Heroes to fuse into Ultraman Reiga to defeat him.

Gina somehow briefly survived Gua Spectre's destruction. Grigio attempted to heal her but was stopped, and Gina explained that it would not work because she was revived without any life energy in the first place. She asked for Grigio's name and thanked her for her kindness before dying once again. Ultra Galaxy Fight: The Destined Crossroad

Gina against the O-50 Ultras 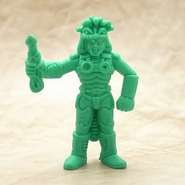