"I am Gilbaris. Proceeding to exterminate all unnecessary sentient life forms."

Gilbaris was an artificial intelligence created by the Kushia People in an alternate dimension, originally named Telaharkis (テラハーキス Terahākisu), which is the Kushian language for "Peace be Upon Us" in order to preserve the planet's peace. However it came to the conclusion that sentient life forms are obstacles in preserving peace, going rogue and renaming itself Gilbaris. Gilbaris creates the first model of Galactrons and proceeded to wipe out its creators except for Airu Higa after her father sacrificed his life to save her from the Galactron Army. Gilbaris turned Kushia into a cyber planet and made it its base of operations.

After the genocide, Gilbaris sent the first model of Galactron to several worlds across several dimensions, one of which being Orb's Earth, to judge and ultimately reset the ecology of each planet by wiping out all life. Gilbaris' activities alerted the Space Garrison in Nebula M78, who sent Ultraman Taro and several Ultra Warriors to the Cyber Planet. The tower holding Gilbaris' core was destroyed by Taro with a single Storium Ray, but the core itself survived and digitized the planet, moving it elsewhere without a trace. After the first Galactron's defeat, and after the Ultraman Orb Chronicle, Jugglus Juggler visited Cyber Planet Kushia and heard about the Red Steel. After encountering Gilbaris, Juggler fled to Geed's Earth, with the planet being the next target to judge and reset. With the presence of the red steel on Earth, Gilbaris sends down the Galactron Army along with a new model, as well as the Baris Raiders to claim it.

After Orb, Geed, Zero and Juggler had dealt with the Galactrons, Juggler left while the Ultras went to Cyber Planet Kushia to settle the feud. Gilbaris transforms into its Perfect Form to battle the Ultras directly. After a hard struggle, Zero and Orb managed to destroy its armor with the Zero Twin Shoot and Orb Supreme Calibur with Geed weakening it with the Giga Thurst and Riser Ray Beam. Geed then ended Gilbaris' reign by destroying its core via Crescent Final Geed.

The Core (コア Koa) is the main part of Gilbaris. It is stored within a white tower-like structure.

Transformation
Add a photo to this gallery
Perfect Form

Bariscornora
Add a photo to this gallery

A Gilbaris figure was released by Bandai in February of 2018. This figure is part of the DX line, standing around 6" high. He features six points of articulation; both legs, both shoulders and both arms, which allows his body to rotate to reveal the large guns located on the backside. Gilbaris is molded in black and painted in gold, pink, silver and red.

Back when arms extended

Back when guns extended

Top
Add a photo to this gallery 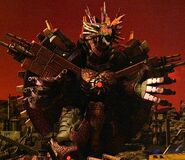 Retrieved from "https://ultra.fandom.com/wiki/Gilbaris?oldid=426970"
Community content is available under CC-BY-SA unless otherwise noted.