"So that's your target! That's right! To destroy it, I shall give Gilarus a new life! Spread the evil energy across the Computer World! Go, the Crystal Monster Gilarus! Destroy it all!"

Gilarus was an animated sprite that was part of a hacking program, called The Castle of Torture, that Takeshi created to torture the people who wrong him. After Yuka wouldn't accept his love letter (due to her being late for class), Takeshi uses the program to hack into the hospital that her family runs, where at the same time Naoto’s little brother, Daichi, was about to get surgery. All of Takeshi’s actions gets the attention of Khan Digifer, who decides to aid Takeshi. So he gives Gilarus life, turning it into a Kaiju and sends it into the hospital’s medical equipment computer system. Gilarus starts rampaging through the computer system, causing mayhem in Daichi’s hospital room. When Naoto and his friends see that Daichi is in danger, they go to their homemade computer, Junk, to access the hospital's computer system and find the Gilarus destroying everything in it's path. They try to send a vaccine program to destroy the virus in the monster, but it has no effect.

Fortunately, when Gridman first appears, he gives Naoto the Acceptor so he can merge with him. Once they merge, Gridman flies to the medical equipment system to face off against Gilarus. However, once he gets there, Gilarus appears to be much bigger than him. Before Gilarus can crush Gridman, Yuka sends Gridman a program that allows him to enlarge to the Kaiju’s size. Unfortunately, once Gridman flips Gilarus over, his energy starts to rapidly decrease and Junk starts to get damaged. Gridman starts to fight against Gilarus, despite his energy running low. After a small fight, Gridman uses Grid Beam to delete Gilarus from the computer system. With the Kaiju gone, Gridman uses Fixer Beam to repair the medical equipment system, allowing Daichi to get his surgery.

An upgraded form of Gilarus from episode 14 of Gridman the Hyper Agent.

Gilarus' data was later upgraded into Mecha Gilarus, redesigned with body armor and steel claws. Mecha Gilarus was used to tamper with time all around the world and the internal clocks of every human; Yuka and Naoto were in the basement at the time and therefore were unaffected. The upgraded monster was destroyed by Thunder Gridman's Thunder Grid Beam.

Smoke
Add a photo to this gallery
Mecha Gilarus

Mouth Beam
Add a photo to this gallery 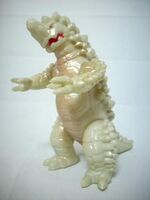 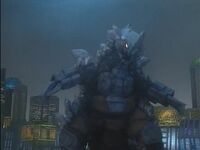 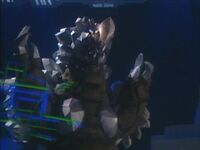 Add a photo to this gallery
Retrieved from "https://ultra.fandom.com/wiki/Gilarus?oldid=540894"
Community content is available under CC-BY-SA unless otherwise noted.