Gilanbo was an ancient evil, each year, she would ascend from her dimension on Halloween Night, disguised as a human in a witch costume. She would go into town and hand out seemingly innocent lollipops, but in fact, these would allow them to control the children's minds to lure them to her lair, where she'd devour their dreams, then leave them in the 'Dream Graveyard'. One year, she appeared in a small town in Japan, but GUTS detected the magnetic field given off by her entering this dimension. Rena was given one of the witch's lollipops but Daigo Madoka noticed her reflecting wasn't showing in the mirror know something was wrong with the witch. The which noticed Daigo, and decided to leave so Daigo chased after her into her own dimension. However, he was soon captured by the evil entity, his gun and the Sparklence were stolen from him. After explaining what she did, Gilanbo tried to gas Daigo to death as she continued her evil work.

Meanwhile, Rena began sleepwalking from the witch's spell but was stopped by her team mates. She revealed what had happened, giving the team the knowledge they needed to track down the Halloween demon as her lair entered this dimension to accept her new stock of food. However, before all the children could be taken, GUTS opened fire on the witch, breaking her spell. Undeterred, Gilanbo caused her lair to head back to her home universe. It seemed as if the evil witch would escape, but suddenly, her lair stopped sinking into its home dimension. Daigo had managed to escape the death trap and reclaim the Sparklence, transforming into the mighty Ultraman Tiga. As Tiga pulled her lair back from its dimension, the enraged Gilanbo transformed to her real self to take her revenge. The beast was a good hand-to-hand combatant as well, able to match the giant of light in combat as few had so far. However, the witch soon decided to pull out all of her tricks, using her teleportation to trick the hero and attack from his blind spots. She then created an army of clones and assaulted the Earth's guardian from all directions. Soon, Tiga's timer began flashing under the demon's assault, but the hero refused to give up and used his Timer Flash to disperse the copies. Now revealed, Gilanbo was beaten down and thrown high into the air where Tiga's Ultra Fix held her in place. Seconds later, Tiga used the Zeperion Beam to put an end to the Halloween nightmare once and for all. Upon her defeat an aurora appeared and the children regained the dreams that Gilanbo had taken from them. 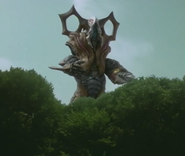 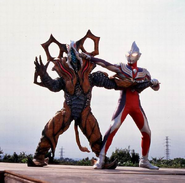 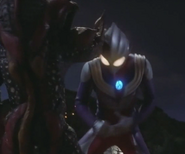 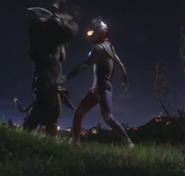 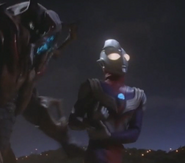 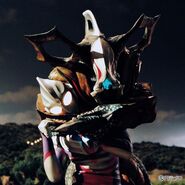