Gikogilar was the second of the negative Kaiju to appear, seemingly out of nowhere. In the middle of the night, he began laying waste to the surrounding city. Yamato was called and UGM flew out to battle the new monster. They soon unleashed their firepower on the monster, but did nothing other than anger it. Despite seeming useless against the beast, they kept firing till finally, Gikogilar spread its wings and flew off into the night. Back at his teaching job, Yamato found one of his students was greatly depressed, so much so he was missing school. In order to cut off a possible source of negative energy, possibly the very one that spawned Gikogilar, Yamato began to try and cheer the boy up, but nothing seemed to work. Yamato finally snapped and yelled at the boy, which he regretted. But as he chased the boy, Gikogilar landed in the nearby area! UGM attempted to battle the monster with jets but it was no good and during the attack, Yamato was pinned under rubble and unable to transform as Gikogilar laid waste to the surround area. Meanwhile, the battle between the negative monster and UGM continued, the monster still unharmed as its winds blew Yamato far enough away to finally take on his true form of Ultraman 80! He instantly attacked the monster with a kick to the chest and the fight was on! However, the monster managed to gain the upper hand and 80's color timer began to blink. However, a hip toss from 80 quickly turned the tide of the battle and 80 began beating down the flying monster. Finally, the Succium Beam was unleashed on the monster, killing the monster instantly. 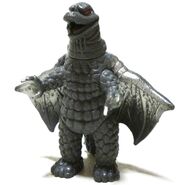 Figure of Gikogilar by Bandai 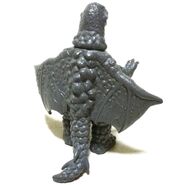 Rear of the Bandai figure 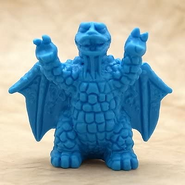 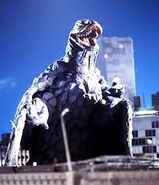 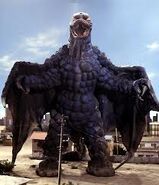 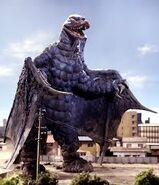 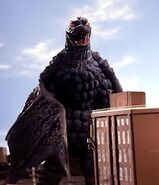 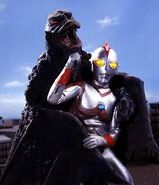 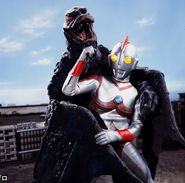