Ultraman Tiga episode 50 "Take Me Higher!"
Gijera (ギジェラ, Gijera) is an ancient plant Kaiju that appears in Ultraman Tiga episode 45 "Eternal Life". Gijera was an ancient, gigantic plant, and was one of the servants of Gatanothor itself. A UFO began to appear in the area where the minion of the dark ruler threatened to rise again. When GUTS tried to scan for energy readings, their scan led to a strange flower and when Daigo got near, he had a vision of cities burning with plants overgrowing them.

From the depths of a forest, deep underground, Gijera commanded its flowers to emit their yellow pollen, causing people around the world to behave strangely. Seeking to understand this phenomenon, the members of GUTS went out seeking a sample but were exposed to the pollen. After collecting a sample Daigo returned to base with them and a strange girl he had found wandering the woods. Something in her speech reminded Daigo of the prophecy that had been given from Yuzare.

As they worked to try to figure it out, more of Gijera’s plants began releasing their pollen all over the city and even the world. In fact, only Daigo and the young girl appeared immune. The girl suddenly collapsed in front of Daigo and a man suddenly appeared. He learned that this man was a member of the ancient civilization and the girl was his daughter. Both of them were cyborgs, who escaped from Earth during Gijera's last rampage. The man revealed that the appearance of Gijera was the beginning of the end for the ancient civilizations, as it could very well be for mankind. It was only because of his Ultra DNA that Daigo was immune to the pollen and was the only chance mankind had of survival as Gijera matured and grew into a towering monster plant. The two left Daigo to do what he would with Gijera. Meanwhile those who Gijera had infected begin to seek it out for more pollen as the initial spread had begun to die down, but those at GUTS pondered if they stop Gijera without making enemies of the whole world which now desired the pollen, Daigo realized how Gijera would destroy mankind, seeing people begin to fight over the flowers, doing anything to obtain them. Refusing to allow this to happen, Daigo transformed into Ultraman Tiga and confronted the source of the flowers. While at first Gijera didn't react, when Tiga struck it, it began to fight back with its vines. Gijera uprooted itself and began fighting with full furry capturing Tiga in its vines. Still the warrior of light fought on as the two ancient cyborgs watched. With everyone under Gijera's power, Tiga seemed unable to win until GUTS arrived and freed him with their lasers, allowing him to fire the Zepellion Ray into the monster's flower. The plant monster exploded but its core was still underground and could survive. Tiga grabbed one of its vines as it tried to retreat and sent a powerful pulse of energy into its core, destroying it and breaking its grip on mankind. Eternal Life 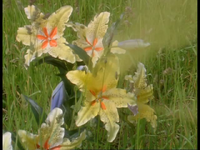 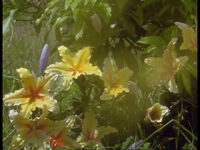 Flowers
Add a photo to this gallery 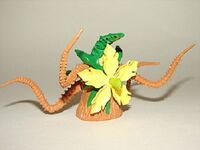 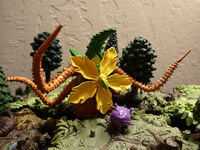 Add a photo to this gallery
Retrieved from "https://ultra.fandom.com/wiki/Gijera?oldid=510882"
Community content is available under CC-BY-SA unless otherwise noted.