None
The Gigantes (ギガンテス Gigantesu) are massive apes that appeared in episode 28 of Ultraman Dyna. Originally, they are a race of gigantic Australopithecus that have gone extinct 1 million years ago as the two last member male and female survived till today.

The male Gigantes was a very strong ape-like monster who wanted to get the attention of a female of his species. While Asuka was patrolling the dwelling area of the Gigantes, the male blasted Asuka's jet out of the sky. After Asuka was discovered by the female, and the ape seemed to be attracted to him more than the male Gigantes, which caused the latter to go on a rampage. He left the forest to kill humanity and regain the love of his life. When the male Gigantes found the female, he was rejected once again. This drove him even more enranged in its attack. Knowing what the monster wanted, Asuka transformed into Ultraman Dyna and challenged it.

The male Gigantes proved to be a formidable opponent to Dyna's Strong Type, but when the Ultra saw that the female was watching, he knew the victor would take her. Knowing that this rampage was caused by the female falling for Asuka, Dyna allowed himself to be thrown around and seemingly beaten. The female, impressed by the battle, took the male as her mate. The pair retreated back to the forest, never to be seen again.

Although not physically seen, Gigantes is one of the hibernating monsters awaken when Genegarg crashed on Earth. It was located in India. 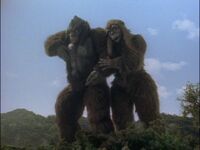 Male Gigantes with the female Gigantes
Add a photo to this gallery
Retrieved from "https://ultra.fandom.com/wiki/Gigantes?oldid=510879"
Community content is available under CC-BY-SA unless otherwise noted.