Ultraman Trigger: New Generation Tiga episode 6 "The One Hour Demon"
Gigadelos (ギガデロス Gigaderosu)[1] is a robot Kaiju that first appeared in episode 14 of Ultraman Taiga. A series of insect-like robots built by the alien inventor Ilt, the Gigadelos robots were mass-produced and distributed to numerous other alien races across the galaxy for use as protectors. However, the impressive machines were driven against their creator and the numerous other alien races who had requested them by Ultraman Tregear and began wreaking havoc on those they were originally constructed to protect.

Gigadelos was a robot built by Ilt to protect people from monsters throughout the galaxy. As other races saw Gigadelos' capabilities, they wanted one for themselves as well, so Ilt created more Gigadelos for them. However, they went berserk when Ultraman Tregear implanted emotions into them, causing them to seek out and destroy all forms of life, including each other and the planets they were supposed to protect. Ilt went to Earth to look for one of the Gigadelos, but it had awakened from the underground because of Kirisaki. Gigadelos first fought against Ultraman Fuma, who intended to finish it off using the Seven Stars Light Wave Shuriken. Instead of getting destroyed, Gigadelos duplicated itself.

Outmatched, Fuma swapped with Ultraman Taiga, who carelessly struck it with the Strium Blaster, causing Gigadelos to duplicate once more. Taiga changed into Photon-Earth to resume the battle, but he was overwhelmed by the three Gigadelos. He decided to use the Night Fang Ring's Fang Wave, which somehow forced the duplicates to recombine into one. Taiga aggressively attacked Gigadelos despite his host Hiroyuki Kudo calling out to him, but eventually stopped when he realized what he was doing. Ilt shut down Gigadelos and allowed Taiga to destroy it using the Aurum Strium. Its remains created the Gigadelos Ring, which Hiroyuki received. The Power to Protect and the Power to Fight

Tregear revived Gigadelos and other monsters from their rings to fight alongside him and the Grimdo-possessed Ultraman Taro against the New Generation Heroes. Gigadelos fought against Ultraman Geed, and receives a power up from Grimdo. However, Ultraman X transforms into Exceed X Beta Spark Armor to finish off Gigadelos. Ultraman Taiga The Movie: New Generation Climax

Satandelos (サタンデロス Satanderosu) was originally a Gigadelos created to fight against monster threats, but was modified into Satandelos and became a destroyer. It suddenly appeared on a deserted island, where it fought GUTS-Select and Ultraman Trigger. They were unable to defeat Satandelos because of its barrier ability, and lost three times over three days. Satandelos made its way to the city and started wreaking havoc there.

Marluru theorized that a Gigadelos was modified into Satandelos by someone. Ignis showed up inside the Nursedessei and offered his help to defeat Satandelos, and GUTS-Select chose to cooperate with him and come up with a strategy. After shooting the Nurse Cannon at 200% power to make a small hole in Satandelos' shield, Ignis boarded the GUTS Falcon to jump through the hole and planted a bomb on the barrier projection device, destroying it and disabling Satandelos' barrier ability.

Hudram then appeared and attacked the Nursedessei as it was about to destroy Satandelos with another shot of the Nurse Cannon, but Ultraman Trigger appeared and fought Hudram. With Hudram distracted, Trigger shot an arrow into Satandelos' legs to stop its movements, which left it vulnerable to the Nurse Cannon's fire, destroying the robot. The One Hour Demon 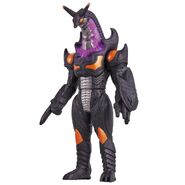