None
Giga Khimaira (ギガキマイラ Giga Kimaira) is a Kaiju that appeared in the film, Great Decisive Battle! The Super 8 Ultra Brothers.

With all of the monsters now destroyed by the Ultra Brothers, the combined number of Black Silhouette around the city summoned the souls of all five monsters and combined them into a towering monstrosity that was Giga Khimaira. Tiga, Dyna, and Gaia, being the only Ultras around to fight, tried to battle the towering monster. However, the Giga Khimaira simply swatted away the Ultra trio and bombarded them with their fireballs. However, touched by the 3 ultra undying spirit to protect the ones they love, Hayata, Dan, Go, and Hokuto, transformed into their respective Ultra forms: Ultraman, Ultraseven, Jack, and Ace. Shortly after releasing the imprisoned Ultraman Mebius. All 8 Ultra Brothers converged to battle Giga Khimaira as one. Unable to stop the 8 Ultras, Giga Khimaira fired its Disaster Burst at the group, only to have its ray reflected back at him, mortally wounding the monster. Outnumbered and weakened, Giga Khimaira tried to flea the planet but was futilely pursued by the Ultra Brothers and was weakened even further by Ultraseven's Eye Slugger. Finally, the 8 Ultra Brothers destroyed the monster by firing their signature beams simultaneously at the monster destroying it in a magnificent explosion in the Earth's atmosphere.

Ultra Monster Series 2008 MOVIE Giga Khimaira is a soft vinyl figure based on its appearance in the movie. Despite having the length of 200mm, Giga Khimaira is out-of-scale, falling behind from the original Ultra Hero Series figures' height. 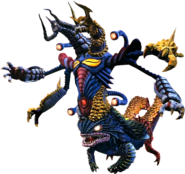