While fighting the revived Gillvalis, Geed Primitive briefly held the Giga Finalizer. But before he could use it, the artificial intelligence shot him to the point of damaging his Geed RiserThe Man Returns!, until Hikari fixes said deviceA Warrior's Duty, allowing him to access Ultimate Final once again, as shown in Ultra Galaxy Fight: The Destined Crossroad. 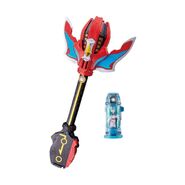 Riku with the Giga Finalizer and the Evolution Capsule

The Giga Finalizer seen with the Orb Calibur