None
Giga Dread (ギガドレッド Giga Doreddo) is an asteroid Kaiju who appear in Ultraman Neos TV series. It appears in episode 10.

An asteroid-like Kaiju made of Dark Matter, Giga Dread came to Earth to aquire new technology to improve itself. It started by absorbing a weather satellite and soon crashed to Earth. It did not take long for HEART to arrive and examine the mysterious asteroid, with Captain Minato finding that Giga Dread was the one responsible for the disappearance of the weather satellite and its origin. Before anything could be done Giga Dread absorbed the hover car with its tractor beam. After a failed attempt to rescue the captain using tow cables it was revealed that the wheather satellite Giga Dread absorbed was actually a military satellite that could explode and destroy everything within a three hundred kilometer radius. That night four dished generators were designed to hold Giga Dread in the air. Before Genki turned into Ultraman Neos, Ultraseven 21 showed up and showed him that Giga Dread has a force field by using his Adorium Ray. That morning there was a countdown to when a generator would be used, but Giga Dread caught on and fire its organic missiles at the generators and HEART. Genki turned into Ultraman Neos and began to deflect the monster's missiles and energy blasts. Shortly into battle Ultraseven 21 showed up to fight Giga Dread as well. The Rejia Shot was used only for Giga Dread's energy blast to neutralize it. After Neos delt a flying kick to Giga Dread the dishes activated, levitating it off the ground, and the two heroes placed it in space where it detonated. Captain Minato was safely returned to crew of HEART.

Force Field
Add a photo to this gallery 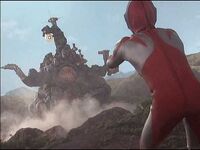 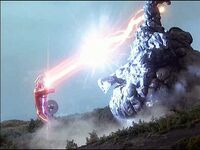 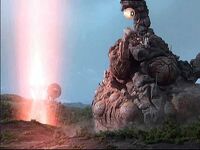 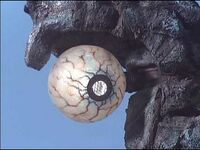 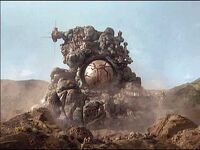 Add a photo to this gallery
Retrieved from "https://ultra.fandom.com/wiki/Giga_Dread?oldid=510875"
Community content is available under CC-BY-SA unless otherwise noted.