Destroyed
Giga Battle Nizer (ギガバトルナイザー Giga Batoru Naizā) is a giant polearm variant of the Battle Nizer that is more powerful than a regular Battle Nizer as it can revive an army of hundred monsters. Unlike other Battle Nizers, the Giga Battle Nizer features a series of unique adaptations and powers that enable its use as a weapon in addition to its purpose in controlling monsters. It is commonly regarded as Ultraman Belial's signature weapon. Its counterpart is the Giga Finalizer used by Ultraman Geed Ultimate Final.

As this item causes monsters to be revived including the Dark Four Heavenly Kings of Alien Empera's Empera Army, and its potential to revive the evil emperor, Ultraman Mebius was sent to retrieve it. When Mechazam appeared to help Mebius, he was revealed to have been a crucial element in the Emperor's resurrection. By uniting the Giga Battle Nizer with Mechazam, Empera would be revived. This did happen, but in a fight with Mebius and Ultraman Hikari, Mechazam sacrificed himself to keep Empera from ever returning with the Giga Battle Nizer being lost in space until it was retrieved by an Alien Zarab to form an alliance with Ultraman Belial.

When Reibatos arrived at the Monster Graveyard, he used his powers to restore the weapon in hopes of restarting Ultraman Belial's plan of reviving 100 monsters to rule the universe. Upon Reibatos' defeat by Ultraman Orb, the Giga Battle Nizer mysteriously dissappears and was somehow received by Ultraman Belial later on.

Belial wields this weapon in the battle with the Ultra Warriors during the Omega Armageddon. It was used to summon the Super-dimensional Eradication Bomb that allowed Belial to trigger the Crisis Impact. Belial also wields this weapon in the battle against Zero and Geed on Earth. During the final battle, Geed once again destroys it with his Geed Proof, blowing it to bits.

Detonator Summon
Add a photo to this gallery

Beam Blocking
Add a photo to this gallery

Energy Beam
Add a photo to this gallery 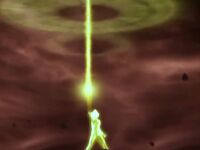 Thunderbolt
Add a photo to this gallery

A single Battle Nizer was able to control it and the monsters used. This is proven when Rei used his Battle Nizer to temporarily paralyze Belyudra giving the Ultras an opening to destroy the monster.

Retrieved from "https://ultra.fandom.com/wiki/Giga_Battle_Nizer?oldid=534159"
Community content is available under CC-BY-SA unless otherwise noted.