Ultraman Z episode 11 "What Must Be Defended"
Giestron (ギーストロン Gīsutoron)[1][2] is a Kaiju that first appeared in Ultraman Festival 2019 before debuting on screen in Ultraman Taiga.

Giestron, alongside Kelbim and Neronga, was sighted by the Galaxy Rescue Force, Ultraman Ribut, Poccola, and RB are sent to fight them. Ribut quickly defeats them with the Remote Cutter. But somehow they were revived by a mind-controlled Sora who approaches the GRF members. Daada also appeared and explains his true motif, he also said Sora created a device in which the kaiju gain unlimited energies. Daada and Sora then leave, thus leaving the three kaiju fighting the three Galaxy Rescue Force members. As Poccola and RB convince Ribut to save Sora, they fight the monsters, with RB summoning his Nova and fighting alongside him. Later, Daada had no choice to bring his three monsters from the battle to assist after Ribut saved Sora. Not long after, all of the GRF members came to help Ribut and Sora. They fired their beams at Daada and his monsters, destroying them for good.

Giestron is the incarnation of the Earth's anger, emerging from the depths of the Earth to take revenge against humanity for polluting the planet. Giestron was sealed away by Takkong many years ago, but had returned due to Takkong's age taking a toll on its ability to seal Giestron away. Giestron emerged in the modern day from underground, destroying helicopters and buildings to take revenge on humans that have been polluting the Earth.

Takkong was still sleeping when Giestron appeared, being woken up by Shinji. The two monsters proceeded to fight each other, but Takkong was overwhelmed and beaten. Giestron then began to control the Earth's electromagnetic energy, trying to cause much of the planet's magma to seep to the surface and end the world. Taiga appeared and used his Hand Beam to interrupt the monster, engaging it in a fight. In his normal form, he barely did anything and got pushed away like Takkong. Giestron tried to attack him with an energy boomerang which was then blocked by Takkong. Taiga checked to see if the monster was okay before changing into Tri-Strium. The guardians of humanity then teamed up against the beast, both assaulting Giestron from different directions. Takkong spun around rapidly and surrounded itself in fire before ramming into the monster, dealing serious damage and allowing Taiga to come in with the Taiga Blast Attack, destroying Giestron and likely ending its threat for a long time to come. Taiga and Takkong then gave each other a high-five as celebration.

Before leaving, Shinji told Hiroyuki Kudo that Giestron may return someday if humans are not willing to change their ways. What's up with Takkong?

When Haruki Natsukawa was still in his elementary school years, Giestron attacked for some reason. His father went off to help other people, but never came back and lost his life in the process, leaving Haruki's mother to raise the boy by herself. The incident haunts Haruki to this day. What Must Be Defended 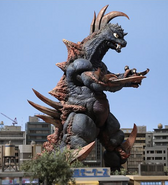 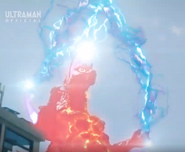 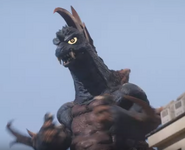 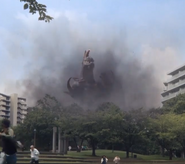