Sent to poison Princess Altasha, Gibra was set free by Leader Jericho. Gibra first killed a Triceratops to lure the corps. As suspected, the corps came. It then stalked Big Lagee and Princess Altasha, and while they left a basket of fruits, Gibra sneaked in the fruit basket. The princess brings the basket inside the Koseidon plane, and Gibra pops out, biting her. The poison causes major pain in her, but Toki Gou manages to kill the beast. He then throws the dead snake into the plains. In order to create an Anti-Venom, Toki Gou went back to the 21st century, but was followed by another Gibra. This Gibra was also killed. Leader Jericho got desparate, and turned the dead Gibra in the Cretaceous Period into Gibras. Gibras was made to stop the Faitus vehicle from transporting the anti-venom, but Toki Gou becomes Koseider in order to distract the snake monster. After an hard battle, Koseider stopped the time, cutting off Gibras' head, causing the death of the monster. 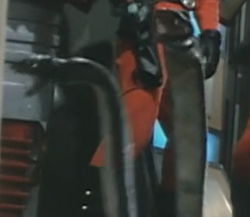 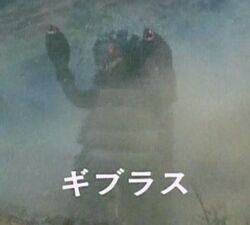 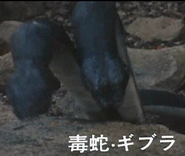 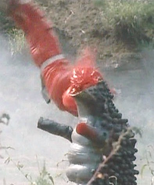