It was first seen being thrown into the air and then blown up by the Super GUTS's GUTS Eagle. What they didn't know was that all of the pieces left of Giaguard would regenerate into smaller versions of itself. His big form returned when all of the smaller versions of Giaguard were brought together by the Trap Field charge by Ultraman Dyna's Miracle Thunder Charge. The two giants then began to fight it out. Giaguard fired his EMP Bolts at Dyna but he performed the Revolium Wave Reverse Type to protect himself from the attack and sent it back to Giaguard. Dyna then tosses Giaguard into space and throws him into a miniature black hole. Dyna then fires his Shining Judge on him and once again, Giaguard is blown into many pieces, but this time, the pieces are sent into the black hole so that they can never regenerate again. 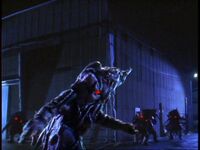 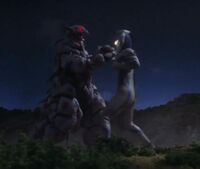 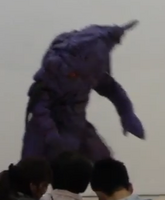 Small Giaguard in a stage show
Community content is available under CC-BY-SA unless otherwise noted.