Ghostdon, an evil spirit monster, made an appearance in the Nakatsudai area, resulting in a truck driver crashing down from a high road, resulting in him getting injured and another driver getting killed.

On a stormy night the monster came back, but only his shadow was seen was lighting was flying threw the clouds.

During a kite competition, thunderclouds appeared after three and a half hours of two kites battling it out and Ghostdon chose the monster kite s it's vessel thanks to the lightning bolts.

After being hit by the monster's lightning bolts while attacking it in a UGM attack vehicle, Yamato couldn't find the strength to transform into Ultraman 80, but then, Father of Ultra appeared in a vision and encouraged Yamato to find his courage and rise back up again.

After transforming into 80, the two giants fought it out in a battle and 80 had the starting point handed to him, but then, Ghostdon used his lightning, wind, and flying powers to hold 80 at bay. 80, however, didn't give up, and, after striking him in the horns with his Ultra Straight Flash, used his Kite String to wound up Ghostdon, used him as a kite, used his Timer Spiral on him to make him spin, and the destroyed him with his Ultra Aura once he got back onto the ground. The Voice of the Father of Ultra Beats in the Sky 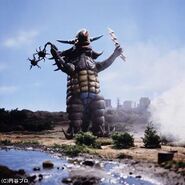