None
Ghost (ゴースト Gōsuto) is a Kaiju who appeared in Mirrorman.

Dr. Tamiya was brought to SGM headquarters to transport sensitive materials pertaining to viruses when the Invaders forced his daughter, Fuyuko, into a river. For three days the police searched for Fuyuko to no avail, Dr. Tamiya still thinking she was alive somewhere. Dr. Mitari relieved him of his duties so he could grieve when a call came in reporting of a monster in Okutama. Jumbo Phoenix was launched soon after where it encountered Ghost near a bridge, quickly dividing and firing missiles at her. Ghost used her tail to destroy the bridge while attacking SGM with his back beam. Just as Kyotaro arrived Ghost used her ear smokescreen to quickly escape. That night Kyotaro spotted Fuyuko enter Dr. Tamiya's house, the professor soon finding her playing the piano. She asked about the anti-Invader virus he and Dr. Mitari were working on and threatened to never return. The next day Dr. Tamiya returned to working on the virus, Kyotaro offering Dr. Mitari to keep an eye on him. He and Yuki went to his house to investigate, soon spotting Fuyuko and chasing her outside into the woods. Three Invaders attacked Kyotaro, allowing Fuyuko to escape. That night Kyotaro returned to expose the fake Fuyuko who ran away from him and left her mask behind. At the same time Dr. Tamiya was looking for Fuyuko and spotted her wheelchair with candles on it rolling into a park. The poster briefly appeared to trick the professor, asking him to take all the virus materials. He returned to the park with the virus in a briefcase, candles appeared around him followed by the imposter swiping the briefcase to the ground where it was set on fire.T he Invader confessed to who she was as she wore a skull mask to terrify Dr. Tamiya. She revealed she stole a random dead body after the Invaders were unable to find Fuyuko and stunned the professor with eye beams.

Kyotaro then revealed himself, stating she burned a fake virus. The imposter threw three low explosive bombs before revealing she was the monster Ghost. Just as Ghost was trying to stomp on Kyotaro he used a reflective piece of the briefcase to become Mirrorman. The hero charged in toward Ghost to use karate chops and kicks followed by the Mirror Knife on her back spines after she fired a back beam. Ghost used her ear smokescreen to hide and sneak up on Mirrorman. After that Mirrorman attacked her while she was down only for Ghost's tail to grab him by the neck and throw the hero. Ghost charged backward to whip Mirrorman only to get thrown. She then used her head blade bomb which Mirrorman grabbed and threw back at her, forcing Ghost to take the resulting explosion. The Slicer H was used to sever Ghost's tail, allowing the hero to dominate the fight before Mirrorman decapitated her with the Miracle Kick, resulting in Ghost blowing up. 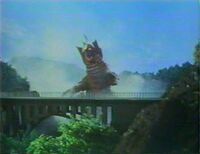