Geshot (ゲシュート Geshūto) is a golem Kaiju introduced in the series, Ultraman Cosmos. He appeared in episode 10.

Long ago, he was originally an alien that took the form of a small statue, it lived in the village where it absorbed the stress of people. Present day, in that small village an archeologist found the statue in a glass container, where it was the sent to EYES. When they opened it, the members felt relived and free. Then one night at the base, it appeared and attacked one of the female members and soon teleported away. The next day it appeared in front of Mushashi and another member and then teleported away. With all the stress it needed it grew big and attacked the city. Using its eye beams it inraged many of the people it attacked. EYES came in to stop it, but the blasted the plane with then caused Fubiki great stress and attacked it. Mushashi then became Ultraman Cosmos to fight Geshot. Geshot gained the upper hand with his fast speed and eye beams. Ultraman Cosmos then went into Corona Mode and absorbed all the beams until he couldnt fire them no more. With the chance he launched them back at him and he blew apart like a balloon, turning him back to his original form. Bronze Demon 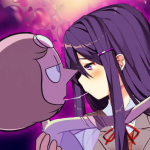