None
Geschenk (ゲシェンク Geshenku) is a Kaiju that first appeared in Ultraman Gaia episode 20.

An ancient egg perfectly preserves since the extinction of the dinosaurs was found in Japan and taken to a research facility. Hiroya Fujimiya found a use for the ancient creature that laid dormant in it, or rather the parasitic organism that had merged with it. and took the identity of a famous paleontologist to reawaken the egg. Within hours the egg cracked and oozed some sort of substance that grew and became Geschenk. The homing napalm bubbles from his horn were too much for both XIG and Tokyo. To prevent Gamu Takayama's interference Hiroya restrained him and took away the Esplender. However, through willpower, the Esplender was activated and Ultraman Gaia came to the scene. While Geschenk tried to defeat Gaia with his whip tail and homing napalm bubbles it wasn't enough as he was blown to pieces by the Photon Edge.

Whip Tail
Add a photo to this gallery 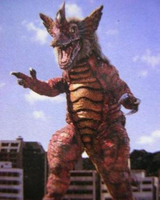 Add a photo to this gallery
Retrieved from "https://ultra.fandom.com/wiki/Geschenk?oldid=510853"
Community content is available under CC-BY-SA unless otherwise noted.