New Ultraman Retsuden episode 45 "Little Heroes! Geronimon's Back"
Geronimon (ジェロニモン Jeronimon)[1] is a Kaiju from Ultraman, appearing in episode 37. A mysterious monster who was at one point rumoured to be the leader of all of Earth's natural monsters, Geronimon is also an extremely capable necromancer, able to revive any monster he chooses using a strange power only he has access to. Angered by Ultraman and the SSSP constantly destroying the monsters under his command, Geronimon battled Ultraman in a duel, only to be defeated himself from a combination of the hero and humankind.

Geronimon's name comes from the Geronimo, the chief of the Chiricaha tribe of the Apache Native Americans, hence his nickname as the Monster Chief and the numerous feathers decorating his head.

Geronimon was a incredibly powerful monster who was reputed to be the leader of the Earth monsters. He was angered by the Science Patrol and Ultraman for constantly killing his monsters, so, in revenge he, revived Telesdon, Dorako, and Pigmon as a warning to the Earth. Re-Pigmon revealed that Geronimon's plan was to revive 60 more monsters in order to take over the planet and defeat Ultraman with this army of monsters.

Ultraman ventures to a frozen arctic wasteland. While there, Ultraman is ambushed by a revived Geronimon, who is trapped inside of a giant icicle. Shortly after, Geronimon breaks out of the icicle and attacks Ultraman himself. After fighting him three times, Geronimon collapses, dead once again. Later on in the story, the feathers on his head are used as an extra body-part for EX Tyrant. Ultraman Fighting Evolution Rebirth 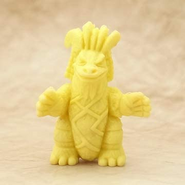 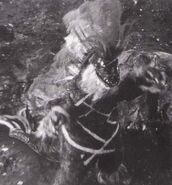 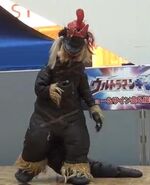 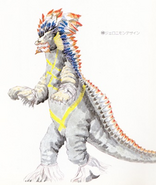 Geronimon with Bemular, Zetton and Toho's King Ghidorah over Japan