None
Geranda (ゲランダ, Geranda) is a Kaiju that appeared in the film, Ultraman Tiga & Ultraman Dyna: Warriors of the Star of Light.

Geranda was a monster sent by the Alien Monera as a decoy in their attempt to conquer Earth. Geranda was their first part in their plan and was seen in battle against Super GUTS. The battle between Geranda and Super GUTS was evenly matched until Ultraman Dyna arrived to stop the monster, taking the battle to the Moon's surface. Both monster and Ultra seemed evenly matched in strength and abilities, until Geranda was destroyed by the TPC's new weapon (secretly under the Monera's control): the Neo Maxima Cannon.

Angler Bone
Add a photo to this gallery

Geranda was released three times by Bandai for their Ultra Monster Series. As seen in the photo, the first (1998, leftmost) and the newest one (2009, rightmost) are almost identical, with the cleaner paint job and metallic body on the 2009 ver. The 2000 edition (center) was a bit stranger, since it consisted of a milk-white vinyl as a base color. All three are nicely detailed, but all are, as a complaint, too short (5 inches) and are not to scale with any of the 6 inch Ultras. 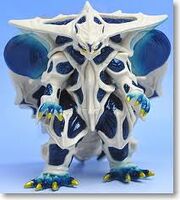 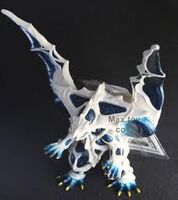 Add a photo to this gallery
Retrieved from "https://ultra.fandom.com/wiki/Geranda?oldid=529207"
Community content is available under CC-BY-SA unless otherwise noted.