The☆Ultraman episode 19 "This is The Ultra Star Part 1"

None
Gerada (ゲラド Gerado) is a Kaiju who appears in episode 19 of The☆Ultraman. It was born from the Spirit Parasite possessing a monitor lizard.

Appearing suddenly in the middle of Tokyo was the four-legged giant reptile Gerada rampaging the urban area. Gerada was quickly met with the Scientific Defense Guard only to fend them off and forced their fighter to crash. As Choichiro Hikari was about to transform, Ultraman Joneus warned his host that Gerada was emitting a dangerous energy. Joneus and Gerada clashed and despite the giant hero's experience, the monster's headstrong tenacity was formidable. Just before Gerada charged into him, Joneus used the Planium Beam to destroy the giant reptile. However, an orb of energy came out of Gerada's charred body and made its way to a nearby python to form the monster Janyur. 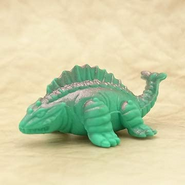 A Gerada eraser
Community content is available under CC-BY-SA unless otherwise noted.
Advertisement