Geozark (ゲオザーク Geozāku), also known as Geo Shark, is a monster that appeared in the TV series, Ultraman Tiga. He appeared in episode 43.

Geozark was the byproduct of the mad scientist Keigo Masaki for him to know who the real identity of Ultraman Tiga is. Geozark first appeared nearby Kumamoto and was about to attack its castle until GUTS arrived and tried to track it. Geozark then disappeared underground before GUTS could do anything else. Later Geozark appeared again, heading towards Mitsui Green Land Amusement Park, threatening to kill several people and children around the park. Goaded by Masaki's advice, Daigo transformed into Ultraman Tiga and managed to pull Geozark out of the ground before it could endanger anyone. After Tiga went into Power Type, he was able to overpower Geozark in battle, but not without Geozark hitting Tiga with a powerful blast of its laser (thanks to the help of its master provoking Tiga). Despite his recent injury, Tiga was able to destroy Geozark with his Delacium Light Stream, but Geozark's deed was done and Keigo had what he needed. 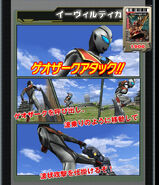 Geozark Attack
Add a photo to this gallery 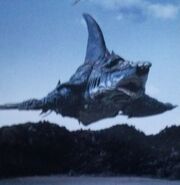 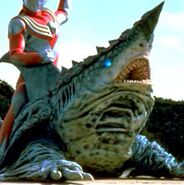 Add a photo to this gallery
Retrieved from "https://ultra.fandom.com/wiki/Geozark?oldid=437321"
Community content is available under CC-BY-SA unless otherwise noted.