George Ikaruga (イカルガ・ジョー Ikaruga Jōji) is a former soccer (football) player who became a member of GUYS durring Ultraman Mebius' time on Earth. He was portrayed by Daisuke Watanabe.

He is a former all-star soccer player, though he broke his leg for a time and had to sit out of his games for a few years. He has a kicking skill named Shooting Star Shot. At the start of the series, a doctor tells him that his knee is finally well enough for him to play soccer again. Ikaruga feels a need to live up to the image that was created for him; that he is a celebrity. He was often looked down upon by his former soccer teammates who thought that he had "sold out". He joins GUYS in order to find some form of purpose in his life. As a former soccer player, he has fast eyes and reflexes, which translate into a natural affinity for METEOR-assisted flying, and this makes him the only person in the team capable of using the METEOR Shot's 'Amazing Triple Shot' function. He is known to mix Spanish into his Japanese sentences. Although he can swim, he admits he does not wish to be involved in any missions at sea because of bad experiences he had in the ocean (and with seafood), and does not wish to be involved in deep-space missions as well.

In episode 25, he fell in love with Asami Fujisawa, a scientist who specialized in the field of interdimensional Physics.

In episode 45, the Phoenix Nest returned from moon after they the crystal space-time wave emitter, while Mebius had defeated Yapool. Suddenly, the Phoenix Nest was seemingly destroyed by some unknown force, leaving Mirai and the world shocked. George, however was saved from the Phoenix Nest and sent to give the message from Deathrem that if Mirai wanted his friends released, Mirai must let Deathrem annihilate him completely.

George later met with Mirai and Crew GUYS, after Mebius and Ultraman Jack saved them and defeated Deathrem.

During the Empera Crisis, when Ryu/Hikari was defeated and Mirai/Mebius was seemingly, Hideki Go/Ultraman Jack was able to contact him telepathically, as the other Ultra Brothers spoke to his friends. With their faith restored, they were able to merged with the saved Mebius, into Mebius Phoenix Brave, and go on to defeat the Emperor. 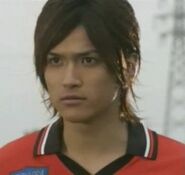 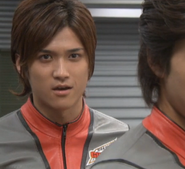 Add a photo to this gallery
Retrieved from "https://ultra.fandom.com/wiki/George_Ikaruga?oldid=427426"
Community content is available under CC-BY-SA unless otherwise noted.