Tiga, Dyna, and Ultraman Gaia Novel: The Adventure in Hyperspace
Geomos (ジオモス Jiomosu) is a Kaiju that appeared in the TV series, Ultraman Dyna. He appeared in episode 35, and later transformed into Neo Geomos (ネオジオモス Neo Jiomosu). Originally a Sphere fragment from Pluto which took the form of a smile facial expression, it assimilated with one of Clarkov NF-3000's Neo Maxima Engine and nearby rocks from Mount Rokkō to become Geomos.

After many years of development, TPC finally perfected the Cosmo Net. A system of satellites to monitor Earth, Moon, Mars, Jupiter, and Neptune all at once. During a reconnaissance test around the moons of Mars, a strange face was found. This strange face was recovered and sent to Earth for analysis. However, the artifact revealed to be none other than a piece of Sphere that attacked months before. Super GUTS had no choice but to release their cargo and crash land it far from Osaka (Rokko Mountains, to be exact) where the Sphere pieces are changed into Geomos. With Geomos emerging from the Earth, Super GUTS attacked with all the had only for the alien rock mutant to reflect their assaults with it's sound field. With Super GUTS unable to harm Geomos, Asuka transformed himself into Ultraman Dyna to do a battle between Geomos. Dyna was able to outmaneuver Geomos's attacks until its lightning managed to hit him. After Dyna went to his Miracle Type and use the Revolium Wave only for Geomos' Trans-dimensional Barrier to neutralize it and continue his assault on the hero. Dyna quickly went back to his Flash Type and use the Solgent Beam twice only for a sound field to cancel out the first and Geomos's lightning to surpass the second and knock him down. Geomos finished the battle with Dyna by hitting him with enough force to send him over the horizon. Geomos burrowed underground while the humans are watching the battle begin to weep for the hero being defeated in a battle for the first time and leaving Japan in a state of panic. An hour had not passed since Dyna's defeat when Geomos managed to burrow all the way to Osaka and started to wreaking havoc. Asuka managed to get Geomos's attention, but while the alien rock mutant started to use his lightning, the Super GUTS member realized he had lost the Lieflasher. With Asuka has knocked unconscious by an explosion from the lightning. Geomos continued his rampage even after Super GUTS was unable to use an electric barrier on it. Before Geomos leave Osaka, a tracker was fired on his back to prevent sudden attacks. However, little did Super GUTS know that deep beneath the ground Geomos had evolved into Neo Geomos.

Neo Geomos is the evolved form of Geomos and is much more powerful than his pre-evolved form.

With Geomos changing into Neo Geomos like a butterfly out of a cocoon, the alien rock mutant made its way to the ocean where self defense force waited for it to emerge. It appeared as through Geomos emerged from the ground, but really it was its old body that Neo Geomos changed form and used it as a decoy. Neo Geomos emerged from the other side of the city and proved itself to be far more than the Super GUTS and the self defense force to handle. However, once Asuka was given back the Lieflasher by a small boy and he transformed into Ultraman Dyna to fight the alien rock mutant once again. With the hero learning from the original's combat tactics, Dyna managed to outmaneuver Neo Geomos even when the Solgent Beam was shrugged off. When caught by Neo Geomos' constricting tail, Dyna went into Strong Type and broke its tail into several pieces before continuing his assault. Once Neo Geomos was in submission, Dyna used his Gulnate Bomber with an assault from Super GUTS to destroy it for good.

Neo Geomos was among the monsters captured by Charija as part of his business but was forced to use it as vanguards of the Red Sphere. Neo Geomos was defeated by Gaia and its cells were used to create Demon Gyrares XIV. Tiga, Dyna, and Ultraman Gaia Novel: The Adventure in Hyperspace

Neo Geomos was released 3 times as a toy by Bandai in their Ultra Monster Series. Neo Geomos was first released in 1997 in conjunction with his episode in the Ultra Monster Series of that year. The figure has articulation in the arms, legs, tail (glue-sealed), and the tip of the tail (glue-sealed). The figure is labeled as number 120 in the series and is made of a dark brown vinyl with silver, metallic blue, mustard yellow, and metallic green (eyes) paint applied separately. The second version, made in the 2000 series, is the same, except it now has a tongue. Both versions have painted teeth, fortunately, and the 2000 version is labeled as number 31. Finally, Neo Geomos was re-released in the 2012 UMS as an EX figure in conjunction with his premier in Ultraman Retsuden. The toy uses the same mold, but in a lighter (soft) brown vinyl with more metallic paints that are lighter. The figure just slightly tips the 6-inch scale, so it scales perfectly well with other figures. 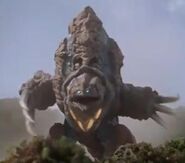 Geomos about to generate the transdimensional barrier

Neo Geomos about to blow up
Community content is available under CC-BY-SA unless otherwise noted.
Advertisement