Geo Base (ジオベース Jio Bēsu) is a facility which acted as the center operations for GUARD Japan in Ultraman Gaia. The base is situated in Tokyo with most of its buildings underground. Originally it was relatively a facility for research but gradually expanded to a huge base with large military and defense facilities, and is frequently exposed to raids of invaders. Aside from being the Lizard's operational base, it also serves as the temporary base for XIG after Aerial Base's destruction. 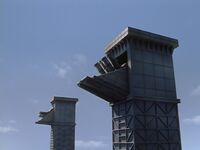 Geo Base's cannons, activated to attack Pazgeek.
Add a photo to this gallery
Retrieved from "https://ultra.fandom.com/wiki/Geo_Base?oldid=510841"
Community content is available under CC-BY-SA unless otherwise noted.