"Electric Monster Generadon! Let the people going to the athlete club suffer!!"
"You turn enjoyments into sufferings. I like it! Go! Generadon!"

A spikey monster that can shake and tremble itself wildly, creating tremors within the computer world. Generadon was sent into a local gym, causing the computerized gym equipment to run wild. Takeshi's intended target was a muscled athlete, but instead put Soichiro, Hideyo, and Hiroshi through a deadly workout. In battle, Gridman could not keep his balance due to Generadon's trembling; like recent monsters, Generadon could also syphon Gridman's energy. With Ippei's quick thinking, God Zenon was modified to form Thunder Gridman and destroyed the monster with the Drill Break.

Generadon's data was upgraded into Mecha Generadon (メカジェネレドン Meka Jeneredon); it was given power sucking armor but could no longer tremble. Mecha Generadon was put into the city's power plant to cut off the electricity. Prior to the battle, Naoto had injured his arm while testing Ippei's electricity generating bicycle. The injury affected Gridman's performance and Mecha Generadon kept biting and attacking Gridman's injured arm. Meanwhile, Ippei had to keep the basement sustained with power by pedaling his bike while Yuka assisted Gridman with Dyna Dragon. Mecha Generadon was destroyed by the Grid Beam. 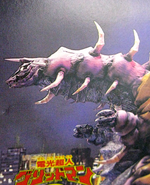