Genegarg (ゲネガーグ Genegāgu)[1][2][3] is a shark-like space monster that debuted in the first episode of Ultraman Z.

Genegarg's name comes from the ancient Greek word "γενειον" (Geneion), which translates to "jaws", which ties into Genegarg's concept of being the "Jaws from Space".[4]

According to an interview with Kiyotaka Taguchi from Ultraman Official Archive magazine and Tsuburaya Galaxy post, the Genegarg suit was made by modifying the Magatano-Orochi suit. The remodeling was made due to a huge portion of the budget had already used for Sevenger's suit. In addition, Genegarg also carried over Magatano-Orochi's mouth munching mechanism.[5]

Genegarg was one of the many monsters affected by the Devil Splinters and turned berserk. Genegarg was possessed by Celebro, who used it to attack the Land of Light and steal several Ultra Medals and the items needed to use them, as well as devouring a Bullton. A Warrior's Principle The monster made its way to Earth where it was pursued by Ultraman Z and Ultraman Zero.[6] During the battle, it released Bullton, who sent Zero to an alternate dimension.

When it crash-landed on Earth, it encountered Sevenger, who joined in fighting the beast with Ultraman Z. At first, it defeated the both of them, but Z returned as Alpha Edge after bonding with his new host, Haruki Natsukawa, who was killed inside Sevenger. Z managed to defeat Genegarg, scattering the remaining Ultra Medals elsewhere.

However, when GAFJ's Monster Research Center collected it remains, one of them unleashed Celebro from inside, who then took possession of Shinya Kaburagi. Chant My Name!

During the aftermath when Genegarg made the collision course with Earth, it apparently woke up several Kaiju that hibernated deep underground for some period of time.

Genegarg and Deathdrago emerged from the ground just after Ultraman Trigger fought against Gazort. He was being overwhelmed by the two of them until Ultraman Z Gamma Future appeared. However, even with the two of them, they were still defeated by the two monsters' brute strength. Akito Hijiri and Yuna Shizuma manage to locate Trigger's lost Power Type GUTS Hyper Key and return it to him, allowing Trigger to change to Power Type while Z changed to Beta Smash. They wrestled against the two monsters and destroyed the both of them with the Zestium Beam and Deracium Beam Torrent respectively. Ultraman Trigger: Episode Z 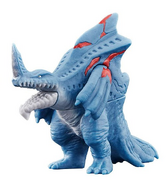 Genegarg VS Z and Sevenger 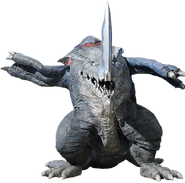 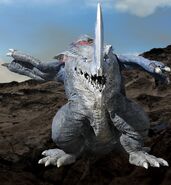 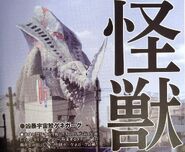