None
Gelworm (ゲルワーム Geruwāmu) is a Kaiju that appeared in the TV series, Ultraman Cosmos. He appeared in episode 23, "Luna vs. Luna".

Gelworm was a Kaiju whom had lived its life on a tiny meteorite with its mate. When the gelworms were separated, The mate was trapped on the meteorite, which was then transferred to a university, where it was being tested with special radiation that was causing her great pain. The male Gelworm tried many times to reunite with its mate on the meteor, taking on the forms of several people to infiltrate the university and steal the meteorite back. Upon taking the form of a scientist, Gelworm nearly managed to complete the task, but was discovered by Keisuke and the shopkeeper and was forced to run away until he ran into a laboratory and accidentally exposed himself to a freezing gas. Once the gas started to somehow electrify the replica, Gelworm turned into his larger form.

Once Gelworm grew larger EYES arrived on the scene only for him to evade their attacks. Once an energy net was dropped everything seemed fine until Gelworm's meteorite reacted, making him react and shake off the net. Musashi turned into Ultraman Cosmos to save the fighter before fighting Gelworm. Gelworm continued trying to make his way towards his meteorite, but Cosmos managed to hold him off until the creature used its pincers to turn itself into Imitation Ultraman Cosmos. Imitation Cosmos then fought Ultraman Cosmos. For a full minute neither of them could gain an upper hand on one another until Imitation Cosmos attempted the Full Moon Rect only to realize he could not. Once Cosmos used the Full Moon Rect, Imitation Cosmos reverted back into Gelworm. Once he turned back into his normal form he turned into his smaller form once he was near his meteorite. On returning to its meteorite it was discovered that he had a mate and would able to live peacefully for the rest of his days.

Molded in blue soft vinyl plastic, this figure features silver paint operations on most of the body, and features a pair of knife-hands on each arm. The packaging & data card represents an image of Cosmos Luna Mode fighting Basical. 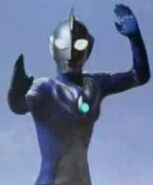