None
Gelan  (ゲラン Geran), also called Geran[1], is a Kaiju from the Ultraman Taro TV series. She appeared in the 47th episode "The Monster Master".

While Ultraman Taro was fighting Gorgosaurus II on a distant planet, Gelan made its way to Earth and hibernated underneath the compound of a school in Tokyo. Taro noticed her as he entered Earth's atmosphere after his previous battle, and decided to return to Earth instead of traveling back to the Land of Light to recover from his injures he had received from his battle with Gorgosaurus. ZAT also noticed Gelan's movements and began a search for her location.

Sometime later, Gelan's offspring were discovered as they were hatching out of their eggs by a young kendo student named Ryuichi, who quickly killed most of the Gelan babies to protect an injured girl. Ryuichi's action angered Gelan, and she emerged from underneath the boy's school, but still remained in her burrow. Gelan destroyed one of the school's buildings and terrorized everyone around her. Unable to escape from Gelan, Ryuichi along with the other students and teachers took shelter in the school's lobby, and ZAT soon arrived on the scene and engaged the Kaiju with their attack vehicles, but the Kaiju resisted their firepower and unleashed energy blasts from her back to counterattack, forcing the attack team to cease fire and hover above the school unable to rescue the students without Gelan crushing them if they tried to land. Gelan then fell asleep, unbeknownst to ZAT.

The trapped students tried to take advantage of Gelan's nap and escape, but Ryuichi accidentally awoke Gelan, and they were unsuccessful. ZAT tried to attack the Kaiju again but to the same results. ZAT member Kotaro Higashi then noticed a gymnastics net bed close to the building where the students were and jumped down to it from his ZAT Fighter, and began a ground assault on Gelan.

Ryuichi, who felt responsible for awaking Gelan, took a katana from his kendo class and ran it into Gelan eye, angering the Kaiju further and causing Gelan to fully emerge from its burrow, Ryuichi then used his katana to injure the Kaiju by placing it on the ground and letting Gelan step on it. Gelan became so dangerously enraged, that Kotaro transformed into Ultraman Taro to take on the kaiju. After a brief struggle, Gelan gained the upper hand by attacking Taro's unhealed injuries. In the end, when Taro realized that the Kaiju was only trying to protect its last remaining egg, he used his Ultra Freezer technique to freeze the Kaiju and its egg and sent them into space where the both of them could continue to hibernate. 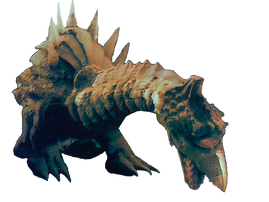 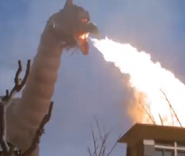 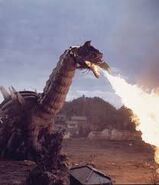 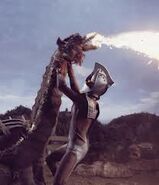 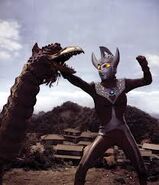 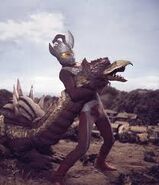 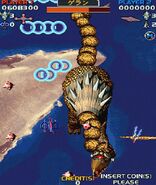 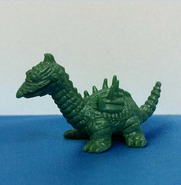