Geegon was a choju created by Yapool after a boy named Haruo who tried to destroy his own violin after getting into an argument with his strict mother. Taking the form of Haruo's violin, the violin began playing itself, stealing the soul of Haruo and a girl. The Cello then flew around the city, slowly stealing the souls of anyone who listened to his playing, growing bigger by the minute. Finally upon growing big enough, the violin began to playing in the heart of the city, stealing even more souls to empower it. After a scuffle with Haruo's mother, who willing put herself under the violin's influence, Hokuto and TAC opened fire at the giant violin. However, this finally unleashed Geegon's true form, who attacked back and downed TAC's jets. Hokuto quickly transformed into Ultraman Ace to battle the violin choju, but Geegon had stolen so many souls and was able to overpower Ace both physically and with the aid of his supersonic attack.

After striking Ace with his lasers, Ace was briefly paralyzed by the choju, but thanks to Earth's sunlight reaching him, Ace fought back and this time severely weakened Geegon by severing the strings that created his music. With Geegon mortally wounded, Ace destroyed the choju with the Metallium Ray. After being killed, Geegon faded away in the form of music, returning all the souls he had stolen.

Violin Form
Add a photo to this gallery 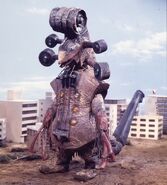 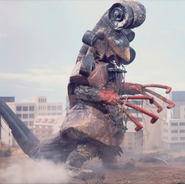 Figure of Geegon, by Marmit.
Add a photo to this gallery
Retrieved from "https://ultra.fandom.com/wiki/Geegon?oldid=429721"
Community content is available under CC-BY-SA unless otherwise noted.