Ultraman Wiki
Register
Don't have an account?
Sign In
Advertisement
in: Articles without an official name, Ultras, Unique Type Ultras,
and 6 more
English

"They are failed products born from my genes, they're your brothers."

World of Side Space

Unknown
Geed's Brothers (ジードの兄弟 Jīdo no Kyōdai), as referred to in the 2018 Ultraman Geed: Super Complete Works, are a trio of Ultraman Belial clones manufactured through his genetic material. Because of their similar history, they are also regarded as older brothers of Ultraman Geed, although unlike the latter, Belial saw them as "failed products". In the Ultra Heroes EXPO 2018 Live Stage, they are also called as Geed's Failed Products (ジードの失敗作 Jīdo no Shippai-saku).

These clones appeared and fought against their successive sibling and Ultraman Zero. As Zero took on the Magnificent clone, the other two (Solid Burning and Acro Smasher) held Geed long enough for Belial to brainwash him at the cost of their lives.

The clone that is based on Geed's Solid Burning (ソリッドバーニング Soriddo Bāningu) form uses assets of Ultraseven and Ultraman Leo.

The clone that is based on Geed's Acro Smasher (アクロスマッシャー Akuro Sumasshā) uses assets of Ultraman Hikari and Ultraman Cosmos.

The clone that is based on Geed's Magnificent (マグニフィセント Magunifisento) form uses assets of Ultraman Zero and Father of Ultra. 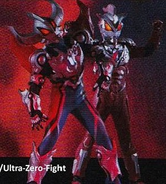