Ultraman Trigger: Episode Z
Gazort (ガゾート Gazōto) is a Kaiju that appeared in Ultraman Tiga. Originally tadpole-like harmless creatures named Clitters (クリッター Kurittā), however, due to exposure of overdose radio waves, they cannibalized each other and took on the said monstrous form to attack the outside world for more food.

Clitters were life forms that lived and drifted in Earth's Ionosphere. They were peaceful in nature, but when mankind created unnatural electromagnetic waves, the Clitters mutated into strange animals, allowing them to combine into Gazorts and cannibalized hundreds of Clitters. Gazort proceeded to pilot the nest of Clitters (in the form of a giant storm cloud) towards Tokyo, transforming the storm into a more solid form that resembled a cocoon. As GUTS was in pursuit of the cocoon, it crashed outside of a city and thus released Gazort. GUTS was quick to retaliate by firing on Gazort with their weapons, but Gazort fought back by attack the nearby city it was heading towards.

Horii of GUTS soon learned that Gazort and the Clitters were originally born on Earth due to Electromagnetic Waves mutating them, and so tried to communicate directly through the Gazort to try and reason with the alien, stating that they (humans) are their friends. Gazort however, being a wild creature, interpreted this statement as the name of their food source and attempted try and eat Horii, leading GUTS to the fact that Gazort ate all the Clitters and now craves fresh meat. Luckily, Daigo had transformed into Ultraman Tiga and took the threat under his wing. Gazort was able to stand its ground with the Ultra by using some sneaky tactics, as well as using his sharp teeth to pierce Tiga's skin, causing him to bleed light, but Tiga took the battle into the sky by transforming into his Sky Type to distract Gazort. Once Gazort left in opening in its attack, Tiga threw it to the ground and finished it off with the Runboldt Beam Shell. Even though Gazort was destroyed, its Clitters live on and returned back into the Earth's atmosphere. Second Contact

Sometime later, a satellite was created to draw electricity from sunlight to power Earth was launched into the atmosphere. When it was, it brought forth another swarm of Clitters and a more powerful Gazort was created. Once Gazort II (ガゾートII Gazōto Tsu) appeared nearby land, GUTS arrived to attack the alien with a microwave-based gun. While the plan was working at first, a scuffle involving Shinjoh's sister and her boyfriend caused the plan to become temporarily disorganized. After the intervention was resolved, Daigo transformed into Ultraman Tiga yet again and battled with Gazort II. Despite Gazort II's enhanced abilities Tiga was able to power through, and after transforming into his Power Type, Tiga caught one of Gazort II's plasma bomb and hurled it back at the alien, destroying it in a massive explosion. The Phantom Dash

Sometime after both Gazorts were defeated, the Clitters still remained active and several Clitter clouds remained. As GUTS was dealing with the monster Jobarieh, several of the Clitters formed clouds and appearing all over the globe. Humanity was quickly growing tired of their pestilence and began working on ways to deal with the Clitters. GUTS had no choice but to exterminate the Clitters so as to prevent them from forming another Gazort. However once it became obvious to the creatures that humanity hated them, what remained of the Clitters began to drift into space, heading for a new home. One Vanishing Moment

Gazort appeared as a Cyber Card in the final episode of Ultraman X. After Ultraman X spoke out to Gomora and striked Greeza right in the center of his chest, Gazort, along with all of the other Cyber Cards, traveled to X and united with him. Cyber Gazort's power was used to help form the Hybrid Armor and power up the Ultimate Xanadium to defeat Greeza once and for all. Gazort, along with the numerous other Cyber Cards and Spark Dolls, then appeared and thanked Daichi as he thanked them. The Rainbow Land

Gazort appears in episodes 6 and 7 of the Ultra Fight-inspired series, Sevenger Fight.

A resident of an unnamed planet, Gazort tripped over Eleking, who was relaxing in an open area, then punched the alien monster in the face. The two monsters began fighting, while Yoko Nakashima arrived piloting Sevenger, which had been equipped with special modifications to operate in outer space. Sevenger attempted to break up the fight, but was simply shoved aside by the two monsters. After several more failed attempts, Yoko had Sevenger use a new weapon, a sword, to fight back. With a single slash to its abdomen, Gazort was brought down with little effort, and Eleking fell not long after, courtesy of another slash from the sword to the top of his head. Sevenger Fight

Gazort was summoned by Hudram, as part of a plan to further awaken Yuzare from Yuna Shizuma's body. The GUTS Falcon was sent to counter attack the beast, and would soon to be joined by Ultraman Trigger who displayed his Sky Type. Trigger was able to defeat the Gazort using his Circle Arms after a battle in the skies, and destroyed it with the Runboldt Arrow Strike. The Ultra-Ancient Light and Darkness

A Gazort suddenly appeared when GUTS-Select and Haruki Natsukawa went to track down the GUTS Hyper Keys that Kengo Manaka lost when he was displaced from the Eternity Core. Kengo transformed into Ultraman Trigger after Haruki passed his Multi Type Key back to him, obtaining it from a Leyrah cultist. GUTS-Select's analysis found the Sky Type Key inside Gazort, and the monster was forced by Trigger to cough it out with the GUTS Falcon's help. Trigger then changed into Sky Type and destroyed Gazort using the Sky Arrow. Ultraman Trigger: Episode Z

Gazort was released two times as an action figure by Bandai in their Ultra Monster Series. The first Gazort was released in 1996 in conjunction with Gazort's first episode air date. The figure itself is fan-rated as the most accurate version of Gazort but unfortunately, suffers from the "no-teeth color" syndrome. Another Gazort was issued out in the year 2000 for the Bandai Ultra Monster Series once again with a less accurate paint job. However, the "no-teeth color" syndrome was fixed in a bad way by making the mouth area completely red. The color also became whiter, making it less popular among fans. The Gazort toys were all created from the same cast and were only a little bit above 5-inches, making scale suffer. To add insult to injury, the Gazort toys also suffer from "humanoid articulation", meaning only the arms and torso rotate. The Gazort themselves have became quite rare, especially the 2000 version. Neither a Gazort II nor Clitters figure were made into production. 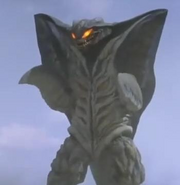 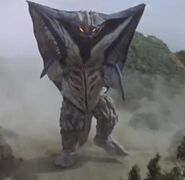 Gazort emerging from the nest 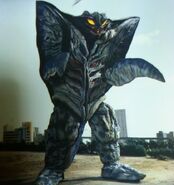 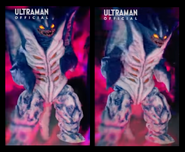 Gazort from A Message From Our Heroes: Special Live Movie (2020) 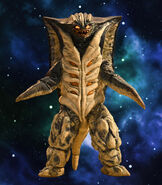 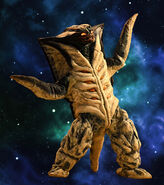