None
Gazera (ガゼラ, Gazera)[1] was a Kaiju that appeared in the TV series, Ultraman 80. It appeared in episode 33.

Gazera is a spirit-like negative monster. He first appeared to frighten a group of people at night in the form of a green fireball. Soon, it appeared outside a hospital in a transparent state, frightening the people inside. However, when UGM arrived to investigate, the beast had vanished.

The next day, a boy was seen crying with a toy he built similar in appearance to the creature by Yamato as his parents talked to the hospital's doctor. He explained his toy, also revealing an interest in Ultraman 80. In truth, he was about to have surgery, and his fear was the negative energy that brought Gazera to life. This fact soon became known to Yamato, and he went to find the boy to discover if this was true.

While he was on his way to the hospital to find speak to the boy, the boy shined a light out the window, causing Gazera to appear before him, though no one but him noticed. Yamato soon appeared to speak to the boy, appealing to his liking of Ultraman 80 to befriend him. However, the fireball form of Gazera soon entered the body of the doll that the boy had created. When the boy came to retrieve it, the toy began to move and the boy tried to fight it with a stick, only for it to grow to the size of an adult human. The boy called for Yamato and had him come with him to where he saw the doll. Soon, Yamato saw the strange beast and shot it, causing it to fall into the ocean.

However, the water flashed and moments later, a kaiju sized Gazera erupted from the waves! UGM soon arrived and opened fire on the titanic beast, but their weapons did nothing on the negative kaiju. He soon unleashed his energy bolts on them, blowing their fighters from the sky. Yamato tried to shoot it but was knocked into the ocean by its flames. Moments later, Ultraman 80 emerged from the ocean. However, the monster proved extremely strong, not even his Succium Beam could so much as damage it and his color timer soon began to blink, it appeared 80 would finally suffer defeat! However, the boy remembered that the chest plate of his toy kept falling off and yelled this to 80, nodded and delivered a powerful kick, breaking the part off the giant, weakening it severely. After this, 80 lifted the negative beast overhead and threw it into a cliff, causing the body to malfunction and fall lifelessly to the ground. Its body defeated, Gazera abandoned it and tried to flee, only to be hit by 80's Ultra Straight Flash, killing it instantly. 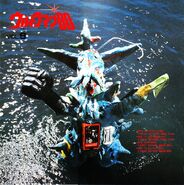 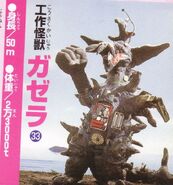