Ultraman: Towards the Future episode 7 "The Forest Guardian"

None
Gazebo (ガゼボ, Gazebo), also known as Zekobon, is an elephant-like Kaiju who appeared in Ultraman: Towards the Future.

Everything seemed like a typical day in a forest in the Australian outback until the monster Gazebo appeared and scared off several civilians and leaving a small girl named Jenny missing. Shortly after UMA and the local authorities started looking, one of UMA's fighters was found by Gazebo. However, before any attacks could be done, Jenny was found not far from Gazebo's position and forced UMA to send in two ground squads. The search went on to dusk without any sign of Jenny and Gazebo proved to UMA to be a major obstacle in their rescue operation with the addition of special forest fungus that released acidic clouds. During a confrontation with Gazebo, Jenny was found and UMA fled towards a cave so they could think about their next move. Jack distracted Gazebo long enough for the others to get away, allowing him to turn into Ultraman Great. Great used the Star Beam and Palm Shooter to get Gazebo's attention only for the natural forest protector to knock him down and continue going after UMA. However, Great was soon knocked down with his color timer going off after Gazebo landed a few swipes. Great did not give up as he managed to trick Gazebo into running into a cave and then sealed it with a rockslide using the Star Beam. 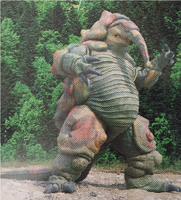 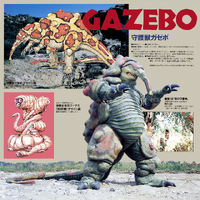 Concept art by Norman Yeend.
Add a photo to this gallery
Retrieved from "https://ultra.fandom.com/wiki/Gazebo?oldid=527537"
Community content is available under CC-BY-SA unless otherwise noted.