New Ultraman Retsuden episode 36 "Terrifying Cosmic Rays: Birth of Gavadon"
Gavadon (ガヴァドン, Gavadon) is a Kaiju that was created when children's graffiti of creatures were brought to life by strange rays coming from outer-space. It was eventually detained by Ultraman and taken to outer space, and changed into a constellation.

Within the confines of Tokyo, a group of children drew a peaceful, larva-like creature at a giant clay pipe. But later, at the break of day, the strange rays turned it into a real, living monster! The creature was peaceful, wanting nothing more but sleep, however its appearance put humanity on edge and the Science Patrol had to get rid of it. They attacked the wailing monster, assaulting it with firepower. Their attacks managed to blow off its tail, but as the sun began to go down, Gavadon vanished into the air. The kids, having seen their creation come to life, went to work at making it into something much stronger.

The children went to work at making it into something much more unique. They gave it limbs and more colors, a defined head, and a much more ferocious appearance and turned it into an adult stage. When the space rays hit the drawing, it came to life, but like its larval form, Gavadon wanted nothing more than to sleep. The self-defense forces wanted the monster gone and attacked it since it's snoring will make a negative impact on the Japanese economy due to it's terrible noise pollution. As numerous rounds exploded on its body, the scared creature tried to flee, but there was no escape.

More attacks struck the monster and soon Hayata summoned Ultraman, who immediately began battling Gavadon, swinging the monster around by his tail! Watching on from a bridge over a weir, teary-eyed, the kids begged Ultraman not to hurt their monster. Hearing their pleas, Ultraman gathered the monster into his arms and flew him into space. Gavadon was transformed into the most ever-lasting piece of art, turning into a constellation of stars the kids could see once every year on July 7. However, the boy who drew Gavadon earlier questioned how are they going to see Gavadon if the same night in the next year will be rain, as the episode ends without an answer. Terrifying Cosmic Rays

Gavadon B was released in 2013 as part of the Ultra Monster 500 series, He stands at 5in tall and has an accurate design and coloring. He has 4 points of articulation and is #15 in the series.

Gavadon's other major contribution to the toy world was for the proposed Original Ultraman Dream Works line, which featured Alien Baltan, Alien Zarab, and Alien Mefilas. The designs are changed slightly for the figures, with Gavadon's being the most notable. 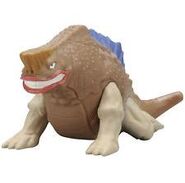 Gavadon Larva and Adult undergo a Powered like figure release. 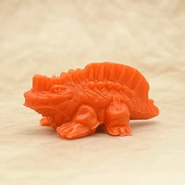 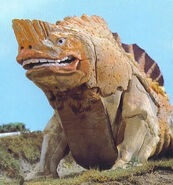 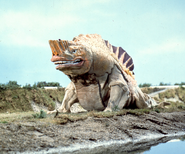 Gavadon and Gango behind the scenes

The Mummy Gavadon meant to serve under Mummy Man.